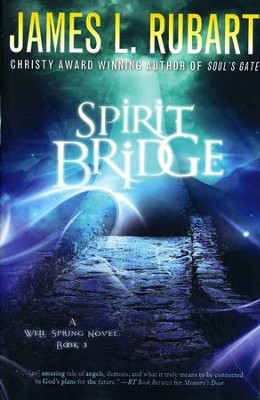 ▼▲
The Warriors Riding have achieved staggering success in the spiritual realm. But all four of them are still reeling from vicious attacks---and the raging warlord Zennon is relentless. With the final battle looming, the Warriors' only chance of survival depends on calling for the Spirit Bridge. Will they be victorious?

The warriors riding have battled in astounding supernatural realms. Set captives free. And awakened thousands of hearts. But now their only chance of survival depends on calling forth the spirit bridge.

Reece, Dana, Brandon, and Marcus have achieved staggering success in spiritual realms . . . but each is reeling from recent vicious attacks. They need rest. A break from the war.

But the warlord Zennon is raging and will give them no quarter. The demon holds what he believes is a trump card—a hidden strategy set in motion before the Warriors Riding even began—that will detonate the team from the inside out. And he’s just set it loose.

The street-magician Simon—finally free of Zennon’s alternate-reality prison—is racing to remember his past before his ignorance obliterates his destiny. Then there’s Miyo, a brash young warrior with advanced knowledge of spiritual realities and supernatural armor even Reece doesn’t know about. They will be pivotal in the final war against the Warriors Riding.

If only the Warriors knew which side Simon and Miyo are truly on.

Spirit Bridge is the epic conclusion to acclaimed author James L. Rubart’s Well Spring series, which will propel each of the Warriors Riding on a quest of true identity, ultimate freedom, and a final battle that will leave them changed forever.

". . . [an] amazing tale of angels, demons, and what it truly means to be connected to God’s plans for the future." —RT Book Reviews for Memory’s Door

▼▲
“The conclusion of the Well Spring series is full of action and conflict. Although the novels deal with spiritually challenging concepts, Rubart makes them understandable and accessible.' '...very exciting and fitting end to a thrilling saga.” -- RT Book Reviews, three stars

▼▲
I'm the author/artist and I want to review Spirit Bridge, Well Spring Series #3.
Back
Back