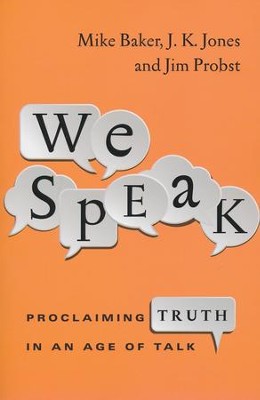 We Speak: Proclaiming Truth in an Age of Talk

As Christians, we are all called to speak out - in our workplaces, schools, and neighborhoods. Our audiences may vary in size, but we are all called to witness to Christ in us. Written in a daily devotional style, this book is designed to be an encouragement and support as you identify and add your voice to the chorus. In addition to the chapters by Mike Baker, there are daily devotions by J. K. Jones and a seven-session weekly group study guide by Jim Probst to help you process all that you are learning.

▼▲
As Christians, we are called to speak. Some of us speak out in our workplaces. Others in our schools or neighborhoods. Our audiences may vary in size, but we are all called to witness to Christ in us. Pastor Mike Baker puts it like this: "Jesus himself has commissioned each of us to be a witness for his kingdom. And every believer has a faith testimony—a story of how Jesus has made all the difference—compelling us to be his representatives." Written in daily devotional style, this book is designed to be an encouragement and support as you identify and add your voice to the chorus. In addition to the chapters by Mike Baker, there are daily devotions by J. K. Jones and a seven-session weekly group study guide by Jim Probst to help you process all that you are learning. Also available is a companion DVD of brief weekly video teachings by all three pastors, which completes this church-wide curriculum series. We live in an age of meaningless chatter. It's time we became speakers of Truth.

▼▲
Mike Baker is the senior pastor of Eastview Christian Church in Normal, Illinois. Starting as youth pastor, he also served as associate pastor and has been with Eastview since 1995. His books include , , , , and . Mike has spoken nationally and internationally to over 250,000 students and was president of the 2015 North American Christian Convention. He and his wife Sara have two grown sons. J. K. Jones (DMin, Dallas Theological Seminary) is pastor of spiritual formation at Eastview Christian Church in Normal, Illinois. An experienced preacher and teacher who provides spiritual direction to pastors, he studied under Richard Foster and currently leads the master of arts in spiritual formation program at Lincoln Christian University. His books include , , , and J. K. and his wife Sue have two grown children and two grandchildren. Jim Probst is pastor of small groups at Eastview Christian Church in Normal, Illinois. In ministry for over two decades, he has served with Eastview since 2008 where he leads a dynamic small group ministry of approximately 4,000 adults in 370 groups. His books include , , and He and his wife Julie have three children.

▼▲
" We Speak offers a heartfelt challenge for Christians to proclaim the story of Christ with courage and boldness. Mike Baker's passion for the preaching of the Gospel—whether in a pulpit before thousands or over coffee with a friend—drips from every page, carrying the reader through chapter after chapter of insight, encouragement and instruction about becoming 'dangerous witnesses' for Christ. . . . We Speak will advance the kingdom by challenging and equipping even the most complacent, the most tentative and the most passionate of believers to enter the conversation of our culture with the heart of Christ, the empowerment of the Spirit and the message of salvation."
" We Speak is sure to become a go-to small group Bible study and wonderful church resource. It's more than interesting; it's a challenge. . . . I see this as a potential best-seller. It's solid, fundamental teaching that is sure to inspire believers to speak in a variety of contexts on the most compelling of subjects: the Good News."
" We Speak is a strong call to evangelism, but it's not about guilt, tracts, or fire and brimstone. This book will remind you that the good news about Jesus is worth telling, but it will also help you know what to say and how to say it."
"God has given each of us a very unique gift—our voice. Nobody can speak for us but us. In We Speak we are reminded of both the necessity and privilege of letting our voice be heard. There is a time, place and manner of speaking that maximizes what people hear us say. This is a great read for anyone who wants to make the most of their words."
"This high quality book, We Speak, won't quite fit in my hip pocket, but it does for my ministry what my Leatherman does for important fix-it jobs. This book is rich in both theological truths and practical application. From the words of a lowly quartet of lepers to the lofty proclamations of kings, We Speak reminds the reader of the power and importance of the words we are compelled to share about our faith. And if that wasn't enough, there is the added bonus of a small group study included. I'm confident you will gain as much from this great tool as I have."

▼▲
I'm the author/artist and I want to review We Speak: Proclaiming Truth in an Age of Talk.
Back
Back