Skip to main content
CUSTOMER APPRECIATION SALE: Thousands of starry deals through 6/22!
The Legacy of Sovereign Joy: God's Triumphant Grace in the Lives of Augustine, Luther, and Calvin; softcover
By: John Piper
Stock No: WW48139 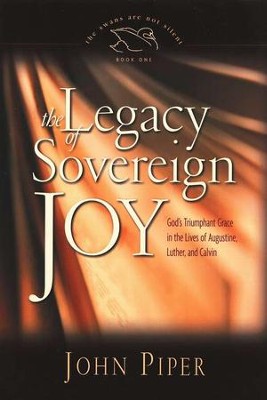 The Legacy of Sovereign Joy: God's Triumphant Grace in the Lives of Augustine, Luther, and Calvin; softcover

By: John Piper
More in Swans Are Not Silent Series
Crossway / 2006 / Paperback
5 out of 5 stars for The Legacy of Sovereign Joy: God's Triumphant Grace in the Lives of Augustine, Luther, and Calvin; softcover (3 Reviews) Write a Review
Buy 48 or more for $11.39 each.
Due in Shortly. Expected to ship on or about 07/01/21.
Email me when this product is available.
Stock No: WW48139

▼▲
The lives of Augustine, Luther, and Calvin reveal the glory and grace of our perfect God in the imperfect lives of his faithful servants. While we admire these men for their greatness, the truth is that Augustine grappled with sexual passions. Martin Luther struggled to control his tongue. John Calvin fought the battle of faith with worldly weapons.

Yet each man will always be remembered for the messages he declared---messages that still resound today. Piper explores each of these men's lives, integrating Augustine's delight in God with Luther's emphasis on the Word and Calvin's exposition of Scripture. Through their strengths and struggles, we can learn how to live better today. As we consider their lives, we behold the glory and majesty of God and find power to overcome our weaknesses. If you're ever complacent about sin, lose the joy of Jesus, or become dulled by the world's influence, the lives of these men can help you recapture the wonder of God. Book 1 in The Swans Are Not Silent series.

The lives of Augustine, Luther, and Calvin reveal the glory and grace of our perfect God in the imperfect lives of his faithful servants.

▼▲
This is the first of a series books entitled, The Swans Are Not Silent. The original quote from which this title is derived reads as follows, The cricket chirps, the swan is silent. Augustines assistant, Eraclius, spoke these words in the funerary oration for the venerable church father. Pipers claim is not to refute these words per se, but to remind contemporary Christendom that [f]or 1,600 years Augustine has not been silent (p. 9). And with him, a whole litany of godly disciples of Christ have spoken, their echoes resounding to this very day. This book then is part Christian biography, part historical exegesis, part Christian devotion, and part analysis/diagnosis of our evangelicalism. Piper takes the perspective of the cricket, allowing the swans to sing through their lives and their words. It is a stirring reminder of the legacy of Gods grace in the gospel and a triumphant exhortation to bear that legacy on, in the same spirit of iron constancy that characterized the three men surveyed.
The three great Christian pastor-theologians are Augustine, Luther, and Calvin. Piper originally gave these chapters as addresses at the Desiring God Pastors Conference. They are not intellectually rigorous, academic studies. Instead, they brim with Pipers warm and zealous personalitya tone that matches the marvelous outworking of Gods grace in the lives of these men.
Each chapter is quite unique in their main themes. The title is thus somewhat misleading; not each life should be characterized by the one phrase, sovereign joy. Instead, only Augustines life and theology, according to Pipers estimation, can rightly be summarized by that phrase. Piper quotes extensively from The Confessions. In this way, we get a good grasp of his powerful voice. He summarizes Augustines theology with phrases like the following: Grace governs life by giving a supreme joy in the supremacy of God (p. 61). One quote, from the ninth book of The Confessions, is used several times throughout the book. In it Augustine contrasts those fruitless joys of his old nature with the sovereign joy of God Himself.
The chapters on Luther and Calvin are the highlights of the book, both in the amount of historical detail and in the striking contemporary relevance of their lives and ministries. This is the major point of continuity among all three men: the relevance and supremacy of grace, not only to the gospel and salvation, but to the current battle against Semi-Pelagian and even outright Pelagian outcroppings in evangelical theology. Luthers chapter focuses on his commitment to the external word. In both Luther and Calvin, this first commitment was so strong because they faced the powerful opposition of the Roman Catholic Church to the doctrine of sola scriptura. Against the backdrop of various persecutions and political upheaval, both Reformers lived and died for the supremacy of Gods Word. Piper shows them heaving and toiling in the study and exposition of Gods Word under tremendous external and internal strain. He demonstrates how both men were so captivated by the Word, that they were driven to the faithful, regular exposition of it.
The only weakness of this book is the slightly misleading title. However, as one reads through it, one comes to recognize sovereign joy in the gospel, in the Word, in grace, in preaching, in suffering, and ultimately, in every aspect of the redeemed life. One of the great strengths that should not go unnoticed is the recognition of the major flaws in the lives of these saints. Piper reminds us that we must learn the secret of gutsy guilt from the steadfastness of sinful saints who were not paralyzed by their imperfections. God has a great work for everyone to do (p. 145). Pastors will come away from this book humbled and then recharged for the great work of the gospel. Every believer will leave this book with their pride wounded, but their appetite for God and for doing His work raised to a higher level.  Jason Park, Christian Book Previews.com

▼▲
I'm the author/artist and I want to review The Legacy of Sovereign Joy: God's Triumphant Grace in the Lives of Augustine, Luther, and Calvin; softcover.
Back
Back