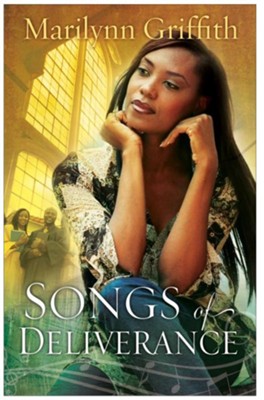 ▼▲
Fifteen years ago, Zeely Wilkins and Ron Jenkins were students the school district stopped believing in. Lucky for them, their teacher knew something the principal didn't; they were cream of the crop but they just hadn't sprouted the way people expected.

Though they went their separate ways, the past is calling them back to the school and the teacher who wouldn't give up on them. Now they'll have to decide what love really means--and whether they're willing to dance to a new tune to get it. But can they rediscover the songs of deliverance that once brought them together? Or will secrets keep them apart?

▼▲
Marilynn Griffith is a freelance writer and conference speaker whose online columns and blogs reach thousands of women each year. She is the author of the Shades of Style series and Rhythms of Grace. Marilynn lives in Florida with her husband and their seven children.

▼▲
Beth Moore is a writer and teacher of best-selling Bible studies whose public speaking engagements carry her all over the United States. A dedicated wife and mother of two, Moore lives in Houston, Texas, where she serves on the pastors council of First Baptist Church and teaches a coed adult Sunday school class with an attendance of over three hundred.

▼▲
This isn't as good as its predecessor, but readers who liked the characters introduced in Rhythms of Grace will be happy for one more dance with Grace, Brian, Zeely, Ron and assorted supporting characters. Ostensibly stand-alone, the story gets moving faster for readers already in on the tangled web of relationships, which gets a lot more tangled, and more related, as the four major characters slowly, slowly move past the trauma that ended the first novel. Both books are set in Testimony, Ohio, a place that, in the author's clever conceit, was home to any fleeing slave who could pay $500 to settle there. The history of slavery ties the story together as it marks and twists family lines laid out in the book. This good idea suffers in execution from a few too many secrets and neat resolutions. The pace also drags, with literal sermonizing as characters sit in church or as they agonize over repeated relationship setbacks. Though her promise doesn't deliver enough, Griffith remains worth watching. (Nov.) Copyright 2009 Reed Business Information.

▼▲
I'm the author/artist and I want to review Songs of Deliverance - eBook.
Back
×
Back
×