Another Man's Sombrero: A Conservative Broadcaster's Undercover Journey Across the Mexican Border - eBook
By: Darrell Ankarlo 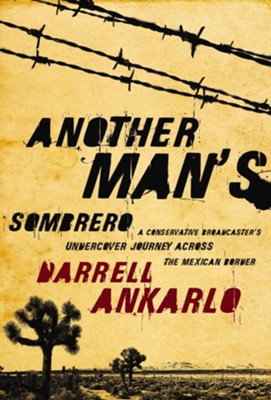 Another Man's Sombrero: A Conservative Broadcaster's Undercover Journey Across the Mexican Border - eBook

Not since the Civil War has America been so divided over such a seemingly unsolvable issue as U.S. immigration policy.

The president and congress are at an impasse, while vigilante groups patrol our nation's borders looking for one of the million yearly invaders. Why are 20 million people disregarding America's sovereign borders and laws to come to this country? Popular radio host Darrell Ankarlo follows the lives of several Mexican citizens as they contemplate their existence south of the border, their temptation to sneak into America, and what waits for them here. To understand the issue first-hand, Ankarlo stared down gun barrels, was caught in the middle of a drug-lord showdown, and then wandered the Arizona desert after illegally sneaking back into America. Another Man's Sombrero explores issues raised by these personal stories and offers perspectives-often contradictory-from U.S. citizens.

▼▲
Darrell Ankarlo  is a gifted radio talk show host who has won many awards, including six Talker's magazine Heavy Hundred Awards (The top 100 talk hosts in America out of over 3,500!); two Dallas Press Club Katie Awards; a Billboard magazine Air Personality of the Year Award; and the Scripps Howard Excellence in Journalism Award. The White House honored him with the President's Volunteer Service Award for his efforts to raise money, support, and awareness for America's military. On the television side, Ankarlo picked up an Emmy for a syndicated show he created and hosted and was nominated for a second program that he also created hosted wrote. He has appeared on the O'Reilly Factor, Hannity and Colmes, Paula Zahn Now, Anderson Cooper 360, NBC's Today Show, Fox, CNN, MSNBC, NBC, the BBC, and other radio and television outlets around the world. Darrell's first book is called What Went Wrong with America an

▼▲
I'm the author/artist and I want to review Another Man's Sombrero: A Conservative Broadcaster's Undercover Journey Across the Mexican Border - eBook.
Back
×
Back
×