Skip to main content
HOURS LEFT! UP TO 76% OFF BIBLE SALE: Save on over 1,100 Bibles. >
Fault Lines: The Social Justice Movement and Evangelicalism's Looming Catastrophe
By: Voddie T. Baucham Jr.
Stock No: WW513284 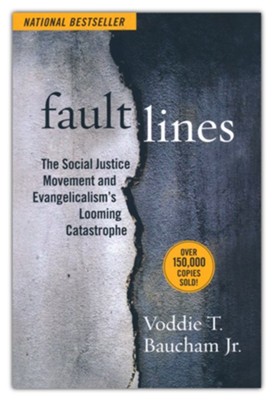 ▼▲
A famed preacher, professor, and cultural anthropologist reveals the cancer of woke theology that has permeated seminaries and that threatens the evangelical church itself. Plus a call to all Christian congregations to eschew the lure of critical theory and hold to the path of an individual relationship with God.

The Ground Is Moving
The death of George Floyd at the hands of police in the summer of 2020 shocked the nation. As riots rocked American cities, Christians affirmed from the pulpit and in social media that "black lives matter" and that racial justice "is a gospel issue."

But what if there is more to the social justice movement than those Christians understand? Even worse: What if they’ve been duped into preaching ideas that actually oppose the Kingdom of God?

In this powerful book, Voddie Baucham, a preacher, professor, and cultural apologist, explains the sinister worldview behind the social justice movement and Critical Race Theory—revealing how it already has infiltrated some seminaries, leading to internal denominational conflict, canceled careers, and lost livelihoods. Like a fault line, it threatens American culture in general—and the evangelical church in particular.

Whether you’re a layperson who has woken up in a strange new world and wonders how to engage sensitively and effectively in the conversation on race or a pastor who is grappling with a polarized congregation, this book offers the clarity and understanding to either hold your ground or reclaim it.

▼▲
Author of the national bestseller Fault Lines, Voddie Baucham Jr. is a pastor and church planter who is currently serving as dean of the School of Divinity at African Christian University in Lusaka, Zambia, where he and his family have lived since 2015. Voddie and his wife, Bridget, have been married for more than thirty years, have nine children and two grandchildren, and are committed home educators.

▼▲
I'm the author/artist and I want to review Fault Lines: The Social Justice Movement and Evangelicalism's Looming Catastrophe.
Back
Back