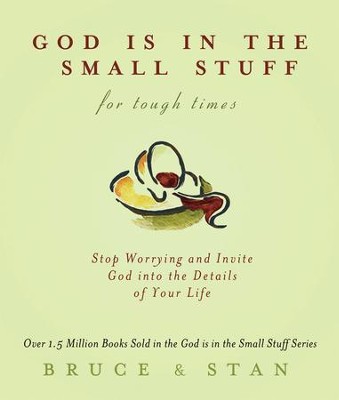 God Is in the Small Stuff for Tough Times - eBook

▼▲
Bruce and Stan's newest book shows readers where to turn when the going gets rough-to the God who cares about every difficulty they face. Based in the timeless truths of scripture, drawing upon life experiences of people who've navigated the dark valleys, God Is in the Hard Stuff offers inspiration and hope.

▼▲
When Bruce Bickel didn’t make the cut as a stand-up comedian, he became a lawyer, which is a career in which he’s considered hilarious.  He is active in church ministries and currently serves on the Board of Westmont College.  He lives in Central California with his wife, where kids and grandkids surround them.

Bruce and Stan have co-authored more than sixty books about the Christian faith, including bestsellers such as God Is in the Small Stuff—and it all matters. They are passionate about presenting the truth of God in a manner that is correct, clear, concise, and casual.

Stan Jantz has been involved with content throughout his professional career as a bookseller, publisher, and writer. He resides with his wife in Southern California, where he serves on the board of trustees of Biola University.

▼▲
I'm the author/artist and I want to review God Is in the Small Stuff for Tough Times - eBook.
Back
×
Back
×