Skip to main content
Upon This Slippery Rock: Countering Catholic Claims to Authority
By: Eric Svendsen
Stock No: WW737477 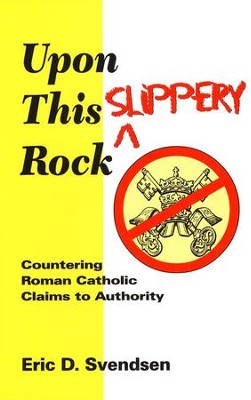 Upon This Slippery Rock: Countering Catholic Claims to Authority

▼▲
Scholar and apologist Eric Svendsen is very committed to the notion of sola scriptura, one of the founding principles of the Reformation. He believes that sola scriptura is "the true source of apostolic faith" and that authority beyond that is not trustworthy. So it is no surprise that he challenges the so-called infallible authority of the Roman Catholic church. For him, that authority does not exist.

He wrote Upon This Slippery Rock to help people understand how Catholic apologists are trying to argue that Catholic infallibility is true by asking three basic "how do you know" questions: "How do you know, apart from your own fallible private judgment, that what you believe is the truth?"; "How do you know that the denomination you picked is the 'right' denomination?"; "How do you know which books should and should not have been included in the canon of Scripture?" By posing these questions, claims Svendsen, the Catholic apologist hopes to show that though your judgment and decisions may be fallible, those of the Catholic church are not, because of the authority given to it by Jesus.

But there is a double standard inherent in those questions. First, the Catholic apologist seems to be saying that those problems do not exist in the Catholic church. Svendsen argues, correctly, that the Catholic church must answer the same questions. Second, it is assumed that your judgment is fallible, but the church's is not. This is a circular argument from the church's authority, which it has because it is infallible. Svendsen hopes that by understanding this, people will be able to effectively answer the "how do you know" questions, and not be drawn away from their evangelical beliefs.

▼▲
I Heartily Endorse It!" .... and strongly commend it to both Christian leaders and fathers, not to mention older and younger men alike."-John MacArthur, Jr. "Ryle Is Magnificent!A  There's no other word for it. ...are you brave enough to face hard-hitting truth and have God search your heart on things that matter most?A  Then Ryle is the man for you!A  Do yourself a favor -read this and think about what you read."-J.I. Packer

▼▲
I'm the author/artist and I want to review Upon This Slippery Rock: Countering Catholic Claims to Authority.
Back
Back