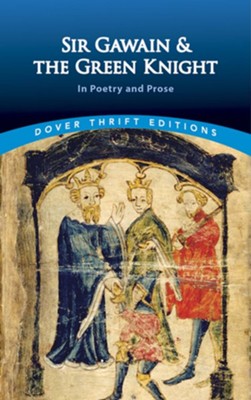 Sir Gawain and the Green Knight

Sir Gawain and the Green Knight tells the story of Sir Gawain's answer to the challenge of the Green Knight. When the Green Knight entered the hall, he said that any knight could strike off his head if in a year's time he could give the knight a similar blow. This edition features both a prose and poetry rendition. 128 pages, softcover.

▼▲
While the knights of King Arthur's Round Table are toasting the new year, a colossal stranger clad in green armor bursts in to deliver a formidable challenge: Any of them may strike off the intruder's head as long as he is prepared to receive a similar blow from the Green Knight in one year. Of all the gallant knights in the assembly, only Sir Gawain—brave, gallant, and true to his word—is willing to answer the dare. So begins this gem of medieval English literature, which traces Gawain's adventures as he endeavors to fulfill his pledge.
Dating from the late fourteenth century or earlier, the story blends paganistic elements with Christian ethics to celebrate the virtue of forgiveness, thus forming a classic example of the chivalric tradition. This edition presents the legend in two forms: in prose and in verse, both translated by the distinguished scholar Jessie Weston.

▼▲
I'm the author/artist and I want to review Sir Gawain and the Green Knight.
Back
Back