Skip to main content
MOTHER'S DAY SALE: Books, Bibles, and more at no-nonsense prices through April 20th. >
Singing through the Night: Courageous Stories of Faith from Women in the Persecuted Church - eBook
By: Anneke Companjen
Stock No: WW26183EB 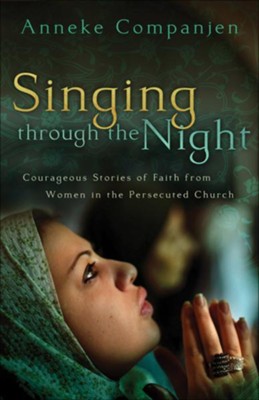 Singing through the Night: Courageous Stories of Faith from Women in the Persecuted Church - eBook

▼▲
There are many untold stories of the persecuted church---stories of women who bravely follow Christ at any cost. This stirring book reveals the lives of eleven women in nine different countries around the world. They have lost husbands, children, homes, jobs, or their very freedom and yet continue to praise and serve the Lord. The lessons that these courageous women learned in tough times will help you persevere and endure whatever hardships come your way. Their stories will ignite your passion and gratitude for the basic right to worship God. May they inspire you, too, to sing through the night.

▼▲
Believers in the West are understanding more about Christians struggling in other parts of the world. However, many of the accounts of the persecuted church are missing an important part of the story--the women.
In this stirring book, Anneke Companjen sheds light on the lives of eleven women suffering persecution in nine different countries around the world. Through their true stories of imprisonment, full of loss and pain, and unexpected joy, these women inspire Western readers to persevere and endure their own hardships for the cause of Christ. At the end of each chapter there are questions for deeper study, whether for individual use or as a guide for small groups seeking to understand and pray for our persecuted sisters. Readers will be deeply moved by the strength and faith of these courageous women.

▼▲
Anneke Companjen is the author of Hidden Sorrow, Lasting Joy. In her travels as a missionary with her husband, Johan Companjen, the president of Open Doors International, Anneke has witnessed firsthand the persecution women endure in many parts of the world. Through speaking engagements around the globe, she brings awareness to the free world-awareness of how these individuals pay a heavy price for their faith in Jesus Christ. Anneke lives in the Netherlands.

▼▲
"In her introduction to Singing through the Night, Anneke Companjen says, 'Christians around the world need each other and we can learn from one another.' This is certainly true for us in the West as we read these amazing and many times heartbreaking stories of women of faith in the midst of the most appalling persecution. We need to read these stories, as they will change the perspective of our own lives and cause us more diligently to pray for our sisters, whose faith radiates the love of Jesus in suffering."
--Fiona Castle, speaker and author, UK

"Real women, deep pain, incredible suffering and enduring faith. Anneke Companjen introduces us to people who will touch our hearts and turn us more earnestly to prayer. An inspiring book to read alone or with a group."
--Robin Claydon, speaker, author, and evangelist , Australia

▼▲
Anneke Companjen is the author of Hidden Sorrow, Lasting Joy. In her travels as a missionary with her husband, Johan Companjen, the president of Open Doors International, Anneke has witnessed firsthand the persecution women endure in many parts of the world. Through speaking engagements around the globe, she brings awareness to the free world-awareness of how these individuals pay a heavy price for their faith in Jesus Christ. Anneke lives in the Netherlands.

▼▲
Three Incredible Women of Faith from the Persecuted Church

In Iraq: Alia
Wife and mother of three remains steadfast in sharing her faith despite the threat of losing her life

Alia comes from a well to-do family near Baghdad, but her current humble dwellings in a UN-protected nofly zone in northern Iraq are far from the life she envisioned before she became a believer. Ali has had the option to move to the States to live safely and continue to share her faith. She and her husband, despite death threats, have chosen to remain in the camp where they rent a one bedroom apartment without electricity that they share with their three children. Here they are able to share the good news of Jesus predominantly with Muslim Kurds.

Alia opens up their home to teach English as a second language. She also seeks to minister to Christian wives, who often face much abuse at the hands of their husbands. This persistence does not come easy. She has often reevaluated her ministry work in Iraq as her family has faced much hardship. It's not living in their cramped apartment that makes Alia take a hard look at her situation, but the way that her children have suffered much harassment and even physical abuse at school. Although, the family has had to go into seclusion at various times, Alia fights to remain strong in her own faith and desire to share the Truth she has found in Christ.

In China: Han Wife and mother of two seeks Christ's comfort as she struggles with feelings of abandonment in raising her children alone with her husband's arrests and imprisonments

With the random arrests of her husband, Han faces much restlessness and anxiety. Her husband preaches and distributes Bibles to varying regions around China where the ultimate punishment could mean death. When her husband is in prison, these times place Han in an uncomfortable social situation as her neighbors look down on her and her children for having a husband and father in prison - never mind the burdens of day to day living she must face alone. And so Han struggles to get support from her community when she needs it most and feels she must hide her tears from her children. Through time, the church is learning to support Han and her family during these hard times. Han has relied on her faith to help her fight for her marriage in these lonely and trying circumstances.

In Peru: Chely Wife and mother has sacrificed her health in supporting her husband in prison for his faith

Chely's husband was falsely accused of the very crime he had dedicated his life to solving. Her husband was successful in battling drug trafficking and was instrumental in putting a number of criminals behind bars; but he had also experienced the power of God's Word in his life and therefore became involved in a Bible distribution project for Peru's military troops. His faith led the military to falsely accuse him of aiding drug smuggling. Even though he was strong in his faith, the prison conditions Chely's husband faces were inhuman and have tested his spirit. His life was in danger since he was confined with some of the same convicts he had helped apprehend.

Through the years, Chely has been faithful in visiting her husband despite the humiliating security searches required. With the help of international advocacy and legal aid in part from Open Doors International's involvement, her husband's prison conditions improved and eventually he was released from his unfair sentence. After her husband returned home, Chely began to experience some physical problems, which she attributes to having suppressed any signs of weakness for so many years. She and her husband have been encouraged throughout the years from the prayer and letters from Christians around the world concerned for their well being. They have learned and continue to learn to humbly ask other believers for the help they need.

▼▲
SINGING THROUGH THE NIGHT: Courageous Stories of Faith from Women in the Persecuted Church by Anneke Companjen (Revell;0-8007-3198-0, PB, 296 pages) Can a book about the persecuted church be optimistic and inspiring? Anneke Companjen answers with an unmistakable "Yes!" in Singing through the Night.
Companjen introduces us to two dozen Christian women in countries from South America to Asia. She includes songs that have meant a great deal to several of them as a unifying theme among the stories, and shows what has helped them through the difficult times of persecution.
The women are a fascinating group. Anna lives on the run in China as she trains child evangelists. She has asked the Lord to give her all of the children of China. Marlene's husband was a right-wing paramilitary thug in Colombia before he became a Christian and an evangelist. Seeing the change in him brought Marlene to the Lord and earned him death threats. In Pakistan, Maryam's children wondered if today was the day they would die. Lee did not become a Christian until she saw fellow prisoners who were Christians refuse to deny their faith in North Korea's death camps. A jealous neighbor killed Grace's only child as an infant, but God used Grace to minister to women and children in war-torn southern Sudan.
Each chapter tells the story of at least two women and concentrates on a method of holding onto your faith during the persecution. Most chapters include an anecdote or thought by Companjen on her experience as a missionary or as a worker for Open Doors International, a relief organization that ministers to the persecuted church. The last chapter guides the reader's efforts to help.
Though similar to her previous book, Hidden Sorrow, Lasting Joy, which was very good, I found Singing through the Night more uplifting and inspiring. In one sense it is inspiring because these women seem like ordinary Christian women, not spiritual superwomen. Companjen brings them to life so that you feel you could sit down with them, learn from them, weep with them.
She ends each chapter with questions that include biblical references, making this a good book for a group or personal Bible study. Also, the questions are not saccharine and shallow as sometimes appear in Sunday school curricula, but are thought provoking and stimulate growth. This would be a good choice for a high school girls' or college-age women's Bible study because many of the women had difficult decisions to make while young. One had to raise her younger siblings while her parents were separated by the economy. Another married a dangerous man who terrified her because she felt she had no choice. Another had to flee her family because they were considering killing her if she would not recant her Christianity, and one was drafted into the Sudanese army!
This is an excellent, uplifting introduction to the persecuted church, especially for women. I highly recommend it.  Debbie W. Wilson, Christian Book Previews.com

▼▲
I'm the author/artist and I want to review Singing through the Night: Courageous Stories of Faith from Women in the Persecuted Church - eBook.
Back
×
Back
×