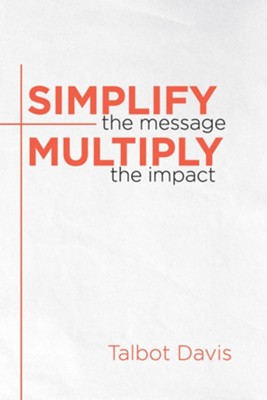 Simplify the Message: Multiply the Impact is designed to help preachers break through the noise of culture and the cauldron of church to deliver sermons with clarity, passion, and boldness. This book meets the needs of two cohorts in particular: 1) young preachers developing their skills who need structure, a process, and hope, and 2) more seasoned preachers who may have "settled" needing tools to invigorate their preparation and inspire their delivery.

Paul told the Corinthians:  "When I came to you, brothers and sisters, I didn’t come preaching God’s secrets to you like I was an expert in speech or wisdom.  I had made up my mind not to think about anything while I was with you except Jesus Christ, and to preach him as crucified."  (I Corinthians 2:1-2, CEB)

Author Talbot Davis shares the insights and habits that will empower the reader’s preaching and teaching to be:

Simple is the opposite of simplistic. Sermons with clear & unmistakable focus are best able to pulumb the depths not only of Gospel beauty but of the hearers’ lives.

▼▲
Talbot Davis is the pastor of Good Shepherd United Methodist Church in Charlotte, North Carolina, a congregation known for its ethnic diversity, outreach ministry, and innovative approach to worship. He has been repeatedly recognized for his excellence in congregational development. During his 10-year term as pastor at Mt. Carmel United Methodist Church prior to serving Good Shepherd, that congregation doubled in size and received the conference’s "church of excellence" award six times. Talbot has also received the conference’s Harry Denman Award for Excellence in Evangelism. Since Talbot began serving at Good Shepherd in 1999, average worship attendance has quadrupled, growing from 500 to 2000 each Sunday. Talbot holds a Bachelor of Arts in English from Princeton University and a Master of Divinity from Asbury Theological Seminary. He lives in Charlotte with his wife, Julie, and they have two grown children.

▼▲
I'm the author/artist and I want to review Simplify the Message: Multiply the Impact - eBook.
Back
×
Back
×