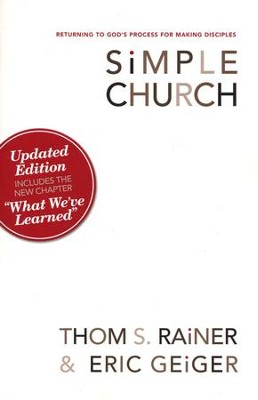 ▼▲
Using case studies of 400 American churches, Rainer and Geiger demonstrate that Christian discipling has often become too complex and intimidating to be effective with postmodern congregations. Discover how churches that are successful in sharing the gospel are following four simple ideas: clarity, movement, alignment, and focus. 272 pages, softcover from B&H.

The simple revolution is here. From the design of Apple products to Google's uncluttered homepage, simple ideas are changing the world.

Now in paperback, multi-awarded #1 national bestseller Simple Church guides Christians back to the simple gospel-sharing methods of Jesus. No bells or whistles required. With insights based on case studies of  400 American churches, Thom Rainer and Eric Geiger prove the disciple-making process is often too complex. Simple churches thrive by taking four ideas to heart:

Simple Church examines each idea, clearly showing why it is time to simplify. This updated trade paper edition includes a new chapter with further insights the authors have gained through hundreds of conversations with church leaders since this landmark book's original release.

Eric Geiger is the Senior Pastor of Mariners Church in Irvine, California. Before moving to Southern California, Eric served as senior vice-president for LifeWay Christian Resources. Eric received his doctorate in leadership and church ministry from Southern Seminary. Eric has authored or co-authored several books including the bestselling church leadership book, Simple Church. Eric is married to Kaye, and they have two daughters: Eden and Evie. During his free time, Eric enjoys dating his wife, taking his daughters to the beach, and playing basketball.

▼▲
I'm the author/artist and I want to review Simple Church: Returning to God's Process for Making Disciples.
Back
Back