Skip to main content
BIBLE SALE OF THE SEASON: Save on over 2,100 Bibles thru 10/26. >
A Short Walk to the Edge of Life: How My Simple Adventure Became a Dance with Death-and Taught Me What Really Matters - eBook
By: Scott Hubbartt
Stock No: WW48763EB 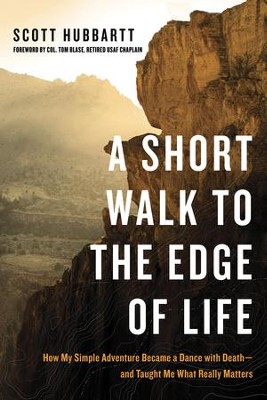 A Short Walk to the Edge of Life: How My Simple Adventure Became a Dance with Death-and Taught Me What Really Matters - eBook

▼▲
Chronicling the failures and miracles of a remarkable physical and spiritual passage, A Short Walk to the Edge of Life is the gripping, true story of a man who had to come to the end of himself before he could find his way home.

How could he possibly make it out alive?

It was supposed to be a simple day hike. Scott Hubbartt was a military veteran with years of survival training. Everyone who knew him considered him an expert adventurer.

But Scott’s trek into the treacherous backcountry canyons of the Peruvian Andes turned into a desperate fight to survive after he became hopelessly lost. As his eight-hour hike lengthened into days, Scott faced dehydration, hunger, and exhaustion. And that’s when his true journey began.

Scott Hubbartt enlisted in the Air Force at the age of seventeen and later became a decorated combat veteran who rose to the highest enlisted rank. Hubbartt is a graduate of the Air Force Survival, Evasion, Resistance and Escape (SERE) School and the U.S. Navy Senior Enlisted Academy at Newport, Rhode Island. He also holds a master’s degree in history and Latin American studies from American Public University. Hubbartt and his wife, Carolina, a native of Per&uacute;, have three daughters and live near San Antonio, Texas.

▼▲
Praise for A Short Walk to the Edge of Life

"Think Robert Frost meets The Worst-Case Scenario handbook. Reading A Short Walk to the Edge of Life took me on the worst possible ’road not taken,’ and even though I feel beaten up and drained emotionally, my spirits are lifted. Indeed, his journey has made all the difference."
—Eric Blehm, New York Times best-selling author of Fearless

"I feel and understand the writer’s suffering as he clung to life in a most rugged environment. While Scott Hubbartt expresses disappointments, he still was willing to pursue the ideal point of his destination. As a Holocaust survivor, I can relate his determination to mine. In my own way I, too, walked to the edge of life. When people are in a peril of life, Scott Hubbartt’s book A Short Walk to the Edge of Life could serve them well in reaching their attainable goals. I strongly endorse this book."
—Boris Kacel, author of From Hell to Redemption

"A true story that makes a compelling read. Scott Hubbartt tells it as it happened. A real-life experience and a refreshing change from the mundane."
—Norman Brackenridge, volunteer in humanitarian endeavors worldwide

"This is a gripping, real-life account of retired air force veteran Scott Hubbartt, who set off on foot for what he thought would be a simple day hike. Instead, the trek became a near-death experience. Readers will find his telling of the journey—and its unexpected and dramatic detour—is as entertaining as it is profound. You are drawn into the story, feeling as if you are walking with Scott along the treacherous slopes of the Andes or tasting the last drops of life-giving water when his very survival is in doubt. Along with witnessing his courage, you will share in Scott’s epiphany
about faith and love and will celebrate his rescue and recommitment to the things that matter most in life. This is a must-read story that will entertain and inspire with each turn of the page!"
—Larry K. Grundhauser, Brigadier General, US Air Force (Retired)

"What was meant to be a short walk in the Peruvian puna turned out to be a four-day battle of survival for Scott Hubbartt in which he not only faced the edge of physical endurance in the most difficult conditions but also touched the depths of a man’s solitary struggle, both emotionally and spiritually. In this precarious moment, Hubbartt gathered all his strength, hope, and confidence, while turning to higher and divine wisdom. His touching and powerful story is a plea for faith, humility, and gratefulness."
—Erika Schuh, author, traveler, and international volunteer

▼▲
I'm the author/artist and I want to review A Short Walk to the Edge of Life: How My Simple Adventure Became a Dance with Death-and Taught Me What Really Matters - eBook.
Back
Back