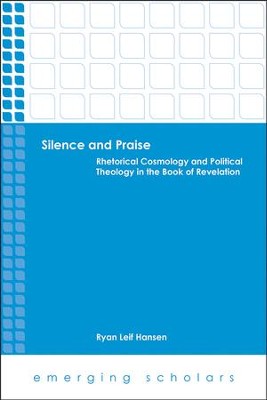 Silence and Praise: Rhetorical Cosmology and Political Theology in the Book of Revelation

▼▲
Cosmology is a central focus in John's Apocalypse, Ryan Leif Hansen argues, but not in the sense that John envisions a stable cosmos. Rather, John employs cosmological themes for persuasive purposes that include a critique of Roman imperial cultic discourse. Hansen's argument requires a discussion of the apocalyptic genre and rhetoric, the ways in which apocalyptic literature makes meaning especially through the construction of symbolic worlds, and then a comparison of this means with cosmological themes in which eternal Rome lies at the center of the cosmos.

John seeks to persuade his hearers that the world, as governed and sustained by Caesar and the Roman gods and perpetuated through the Roman cult and economy, is a false order, passing away in order that God's new creation, narrated by truthful worship and costly witness to the Lamb, can emerge as gift. Silence and Praise concludes with suggestions for fruitful conversation with recent work in apocalyptic theology.

▼▲
Silence and Praise offers a creative synergy of rhetorical, liturgical, and political readings of the Apocalypse. It echoes and paints the dramatic visions of St. John's cosmology in critique of the imperial cult. Dr. Hansen bridges the biblical audiences of ancient and contemporary who are transformed for worship of the First and the Last who sits on the eternal throne.
-K. K. Yeo,
Garrett-Evangelical Theological Seminary

In this wonderfully written book, Ryan Leif Hansen makes the case that John's Revelation envisions the unmaking of a broken world disfigured by the political and economic practices of an unsettling, evil empire. Constructing what he calls a 'rhetorical cosmology,' Hansen contends the prophet is mostly interested in persuading his auditors to a way of thinking about the social world in which they live a marginal existence. The prophet's goal is not to encourage the embattled communitys passive co-existence of survival or to acts of violent rebelling but to participate with a sovereign God, who has already judged that evil world through the exalted Lamb's slaughter, in remaking a new order of shalom. The book's doxologies, strategically placed, provides a rhetorical cue: the community participates in Gods redemptive program by its radical acts of non-participation in the exploitive demands of powerful elites and especially in its worship of God. Hansen's reading of Revelation provides a way forward, not only in understanding the book's apocalyptic landscape but in relating its message to today's church.
-Robert W. Wall,
Seattle Pacific University and Seminary

Against a reading of Revelation that assumes that John presents to his audience a meditation on a sturdy and stable cosmos, Hansen suggests that the author creates a rhetorical cosmology, that is, a discursively constructed experience of the world. According to this view, the dismantling of the cosmos described in Revelation comes not in a literal way but in the reading and performance of the text done by the community gathered in worship. By tracing the origin of the Apocalypse to the politically subversive nature of the early church's liturgy, Hansen is empowering present day readers to recover the true context and message of Revelation.
-Osvaldo D. Vena,
Garrett-Evangelical Theological Seminary

How shall Christians 'change the world'? It seems like a basic question. But according to Ryan Leif Hansen, the book of Revelation confronts us with more fundamental, unsettling questions: Which world? The one so obviously governed by idolatry and injustice - the one so massively 'there'? Or the world coming into being through the crucifixion and resurrection of the Lamb-Messiah? And what change? The change we impose through power, coercion, and violence? Or the change already wrought by the Lamb who was slain, in which we participate through silent prayer and boisterous praise? Hansen's work on Revelation makes a crucial contribution to political theology.
-Douglas Harink,
The King's University College, Edmonton

A thoughtful and sustained interpretation of the book of Revelation that takes it seriously but not literally, rhetorically but not as simply a verbal construct. Synthesizing the work of a variety of modern scholars, Hansen presents a compelling interpretation of the importance of this ancient work.
-David L. Barr, Professor Emeritus,
Wright State University

▼▲
I'm the author/artist and I want to review Silence and Praise: Rhetorical Cosmology and Political Theology in the Book of Revelation.
Back
×