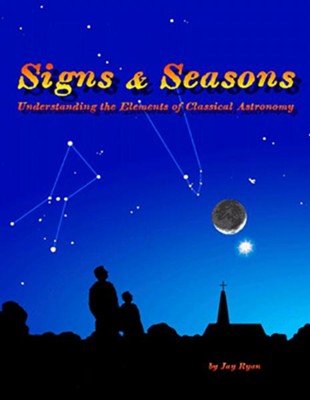 ▼▲
Using the biblical use of astronomy--for signs and seasons--as a foundation, this illustrated book will take a deeper look at the stars and sun we so often view. Filled with notes on historical practices, readers learn about where the terms A.M. and P.M came from, how Passover is linked to astronomical cycles, and the biblical heritage of timekeeping through the sky! 40 pages of field activities are included as well. 225 pages with index and astronomical tables.

Tell us a little about yourself.  I'm a Christian home school dad in Cleveland, Ohio, the father of five children (three sons and two daughters). My wife Debbie and I have been married nearly 20 years.

What was your motivation behind this project?  In studying astronomy over the years, particularly the early American almanacs, it became clear that for centuries astronomy had been done to the glory of God. Words of praise to the LORD filled these almanacs. The world has forgotten classical astronomy, choosing instead to dwell on evolutionary theories and exotic, theoretical bodies that no one can see. It is hoped that the traditional study of the Sun, Moon, and stars can be reclaimed for Jesus by a young generation of students here in the 21st century.

What do you hope folks will gain from this project?  It is my hope that students of all ages will rediscover the wonderful order the LORD has established in the sky and truly appreciate how "the heavens declare the glory of God." (Psalm 19:1)

Who are your influences, sources of inspiration or favorite authors / artists?  The inspiration for this project came from reading the great works of astronomy -- works of science and also literature. Many books were read from classical, medieval, and early modern times, authors including Cicero, Chaucer, Galileo and many more. I also came to love the astronomical almanacs of colonial America, an early source of science and literature among the Founding Fathers. Through this study, it became increasingly clear that classical astronomy had been studied throughout history but became neglected during the 19th century -- a state of affairs that continues today.

Anything else you'd like readers / listeners to know:  We offer the Classical Astronomy Update, a free newsletter of astronomy for Christian home schoolers (though everyone is welcome). You can sign up at www.ClassicalAstronomy.com. Feel free to drop an email anytime.