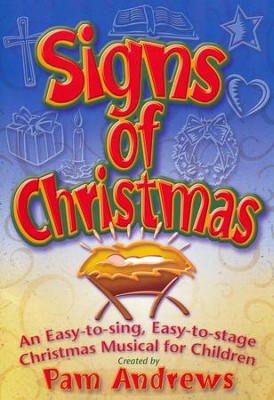 ▼▲
An ideal choice for children's choirs needing easy-to-learn songs and an easy-to-stage production. These easily attained arrangements are joined together with a narrative script any kids' group can perform. As always, there's a strong central theme with an inescapable gospel message.

The signs of Christmas are everywhere. The important thing we must do for our children at Christmas is to make sure all these signs point to Jesus. Jesus, who came to earth a baby in a manger, to Christ who died for us on the Cross.

Voicing: Unison with optional second parts Cast: Signs of Christmas allows six speaking (narration) parts for children, plus non-speaking roles for Mary, Joseph, and children to hold the signs of Christmas - a wreath, a heart, a Bible, a lit candle, a Christmas present, a cross. There are no singing solos written, but the director may choose to allow soloist(s) to sing some of the song verses.

Suggested Use: Multiple uses: as an easy Christmas musical for kids in church; as a puppet show; as a Christmas concert with a narrator reading all the speaking parts and the children's choir singing.

▼▲
Originally from Poplar Bluff, Missouri, Pam Andrews received a bachelor of music education degree at Union University, Jackson, Tennessee. She was a performer at Opryland USA and also worked as a commercial actress for several years, appearing in many television commercials, as well as national television shows. She has taught pre-school choirs, children’s choirs, and is currently the three-year-old choir director at First Baptist Church in Hendersonville, Tennessee. She has also served as an elementary school age music specialist. She is a children’s Christian songwriter and is known for her curriculum developmental ideas found in the numerous teacher resource books she has written, and is the creator of many children’s choir musicals, including Splash Kingdom, United We Stand, On with the Beat, A Christmas Carol, A Shepherd’s Story, Son Rise, The Kids’ Hymns Project, and Cross Country. Pam is married to David Andrews and has two children, Matthew and Leigh.

▼▲
I'm the author/artist and I want to review Signs Of Christmas, Book.
Back