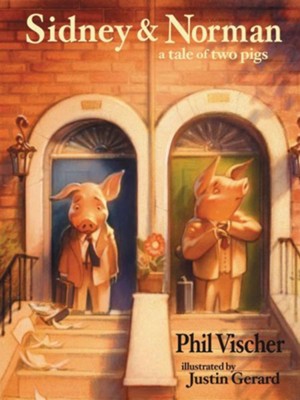 A stirring story and lovely illustrations create a multi-layered tale that is both charming and thought-provoking. Sidney & Norman uses the simple context of two pigs living next door to each other to communicate a profound truth about how we judge each other and often judge ourselves. On the surface, Sidney & Norman appears to be a picture book that will entertain kids. But this story has deeply moved adult audiences as well and can help us reconsider how much God loves us and how we love each other.

Phil Vischer is the CEO and Chief Creative Officer of Big Idea Productions. As co-creator of the popular series, VeggieTales™, he has also served as writer, director and voice for more than a dozen characters, including Bob the Tomato. Since the release of the first VeggieTales™ episode in 1993, more than 30 million units have been sold in the series. Vischer and his wife, Lisa, live in the Chicago, IL with their 3 children.

▼▲
I'm the author/artist and I want to review Sidney & Norman: A Tale of Two Pigs.
Back
×