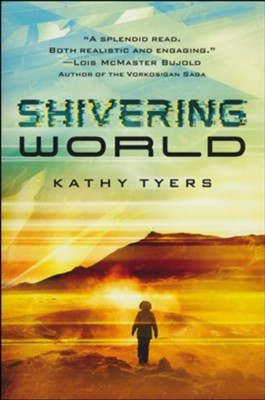 Microbiologist Graysha Brady-Phillips accepts a hazardous position assisting in terraforming the planet Goddard, partly to get out of debt and partly in desperate hope. There's a chance that the colonists are conducting illegal genetic research, which could provide a cure for the genetic disorder slowly killing her.

But genetic engineering is banned by the powerful Eugenics Board, and Graysha is the daughter of the board’s high commissioner. When the colonists discover her connection, she is ostracized—the possible penalties for conducting their radical research include death. Graysha tries to pursue her profession and befriend the colonists, but soon she is dodging attempts on her life.

When her new world is pushed to the brink, Graysha must decide what she will cling to.

▼▲
Kathy Tyers has published ten novels, including her popular Firebird series, two authorized novels for the Star Wars expanded universe, and Shivering World. When she isn't writing, she might be teaching a flute lesson, mentoring a hopeful author, or battling weeds in her vegetable garden. Kathy lives in Montana with her husband William Gillin.

"A woman scientist, Graysha Brady-Phillips, migrates to a cold space colony called Goddard, where colonists have managed to extend the average lifespan to 150. Like Earth itself, Graysha is dying, but the cure offered by Goddard scientists may be worse than the disease, at least in ethical terms." — Booklist
-- Booklist

▼▲
I'm the author/artist and I want to review Shivering World.
Back
Back