Skip to main content
SPRING CYBER EVENT STARTS NOW: And it's a really BIG deal! Up to 88% off through 5/24>
Lost Love and Shipwrecked: Madeline Pike Finds Hope in the New Land
By: Jessica Marie Dorman, Cathy Lynn Bryant
Stock No: WW140711 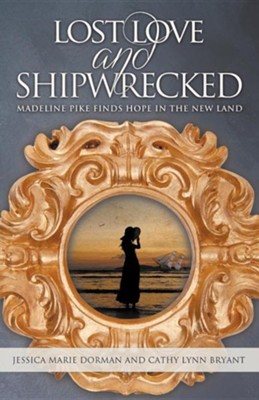 ▼▲
ABOUT THE BOOK: In 1635, Madeline Pike, along with nearly thirty other passengers, set sail from King's Road, Bristol, England, for New England aboard the Angel Gabriel, but just as the final leg of her journey was in sight, the ship surrendered to a fierce hurricane. Madeline was thrust into a violent ocean amidst powerful winds and rough waves as the ship sank out of sight. Just as she is about to give up hope, a handsome young man comes to her rescue. While Madeline and her rescuer attempt to deny the feelings that are developing between them, an indomitable villain, who lets nothing stand in the way of getting what he wants, decides he wants Madeline for his wife. Who will win her heart? Read Lost Love and Shipwrecked, and journey back to the 17th century, a period when life and love reflected our nation's godly heritage. Be inspired to see how, through every trial or decision Madeline faces, her faith in God remains unshakable. ABOUT THE AUTHORS: Inspired by interesting characters and events uncovered while doing genealogical research, mother and daughter writing team, Cathy Lynn Bryant and Jessica Marie Dorman, who live in beautiful New England, have masterfully woven the stories of real people and fictional characters from the 17th century to develop this inspirational, romantic, work of historical fiction. Lost Love and Shipwrecked is the first in the series, Unshakable Faith, with the second book to be completed in 2013.

Tell us a little about yourself.  We are a mother and daughter writing team currently residing in New England. We began writing the "Unshakable Faith" series in 2010. Our second book in the series will be coming out soon.

What was your motivation behind this project?  Our genealogical record consists of several interesting events. The first book in the "Unshakable Faith" series utilizes one of these events as a starting point for the book--namely the wreck of the Angel Gabriel in 1635. Additionally, one night in early 2010, as we were conversing, we found that we both had been thinking about writing. Moreover, we were astonished to learn that we had the same time frame in mind--a time depicting this nation's godly heritage. I have to say that, after learning that we both had a desire to write this particular series of books, it felt as if God was directing us.

What do you hope folks will gain from this project?  We intend to incorporate a brief gospel message into each of our books. We hope that there might be some who will be moved by the salvation message. As each of the books will contain a bit of history, we trust that they may be educational as well. Additionally, we hope to entertain folks with wholesome relationships overflowing with romance.

How were you personally impacted by working on this project?  Besides learning a lot during the research phase of the book, we were humbled by the fact that others would be reading our words. Words that we hoped would, not only entertain, but would draw them closer to God.

Anything else you'd like readers / listeners to know:  Charles Bryantthe worlds best husband and father, meticulously perused our manuscripts and offered helpful edits and suggestions. Nate Dorman, an exceptional son-in-law and husband, willingly offered his support for the time his wife devoted to writing the book. Additionally, his excitement over the series has been encouraging