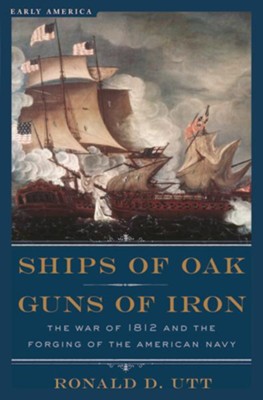 Ships of Oak, Guns of Iron

▼▲
The War of 1812 is typically noted for a handful of events: the burning of the White House, the rise of the Star Spangled Banner, and the battle of New Orleans. But in fact the greatest consequence of that distant conflict was the birth of the U.S. Navy. During the War of 1812, America’s tiny fleet took on the mightiest naval power on earth, besting the British in a string of victories that stunned both nations.

In his new book, Ships of Oak, Guns of Iron: The War of 1812 and the Birth of the American Navy, author Dr. Ronald Utt not only sheds new light on the naval battles of the War of 1812 and how they gave birth to our nation’s great navy, but tells the story of the War of 1812 through the portraits of famous American war heroes. From the cunning Stephen Decatur to the fierce David Porter, Ships of Oak, Guns of Iron relates how thousands of American men and boys gave better than they got against the British Navy. The great age of fighting sail is as rich in heroic drama as any epoch.

Dr. Utt’s Ships of Oak, Guns of Iron retrieves the American chapter of that epoch from unjustified obscurity, and offers readers an intriguing chronicle of the War of 1812 as well as a unique perspective on the birth of the U.S. Navy.

▼▲
I'm the author/artist and I want to review Ships of Oak, Guns of Iron.
Back