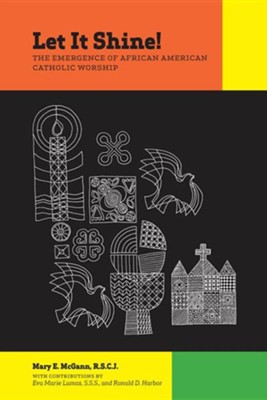 Let It Shine!: The Emergence of African American Catholic Worship

Let It Shine probes the distinctive contribution of black Catholics to the life of the American church, and to the unfolding of lived Christianity in the United States. This important book explores the powerful spiritual renaissance that has marked African American life and selfunderstanding over the last several decades by examining one critical dimension: the forging of new expressions of Catholic worship rooted in the larger Catholic tradition, yet shaped in unique ways by African American religious culture.

Starting with the 1960s, the book traces the dynamic interplay of social change, cultural awakening, and charismatic leadership that have sparked the emergence of distinctive styles of black Catholic worship. In their historical overview, McGann and Eva Marie Lumas chronicle the liturgical and pastoral issues of a black Catholic liturgical movement that has transformed the larger American church. McGann then examines the foundational vision of Rev. Clarence R. J. Rivers, who promoted forms of black worship, music, preaching, and prayer that have enabled African American Catholics to reclaim the fullness of their religious identity.

Finally, Harbor constructs a black Catholic aesthetic based on the theological, ethical, and liturgical insights of four African American scholars, expressed through twenty-three performative values. This liturgical aesthetic illuminates the distinctive gift of black Catholics to the multicultural tapestry of lived faith in the American church and can also serve as a pastoral model for other cultural communities.

Blending history, theology, and liturgy, Let It Shine is a valuable resource for scholars, teachers, and students and a practical pastoral guide to bringing African American spirituality more firmly into the sacramental life of American parishes.

▼▲
I'm the author/artist and I want to review Let It Shine!: The Emergence of African American Catholic Worship.
Back
×