Skip to main content
ENDS SOON! UP TO 76% OFF BIBLE SALE: Save on over 1,100 Bibles thru 1/31. >
Shepherds After My Own Heart: Pastoral Traditions and Leadership in the Bible (New Studies in Biblical Theology)
By: Timothy S. Laniak
Stock No: WW826212 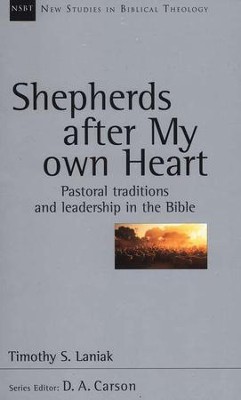 Shepherds After My Own Heart: Pastoral Traditions and Leadership in the Bible (New Studies in Biblical Theology)

▼▲
Shepherds After My Own Heart is a full-length academic treatment of the theme of the shepherd/pastor throughout the whole of scripture. It comprises a detailed study of Ancient Near Eastern understandings of this powerful metaphor, its uses and development in the Old Testament and its employment by the apostolic writers to describe the messianic significance of Jesus Christ, both in his earthly ministry and in his ascended and apocalyptic Lordship over church and world. In doing so, it articulates key elements of a biblical theology of pastoral ministry and leadership.

Scripture says, "I will give you shepherds after my own heart, who will lead you with knowledge and understanding" (Jeremiah 3:15). Most of Israel's pastoral imagery is grounded in two traditions: Moses as God's under-shepherd and David as shepherd-king. These traditions, explains author Timothy S. Laniak, provided prototypes for leaders that followed, and formed the background for the ministry of Jesus, the good shepherd. The pastoral role was central to the ongoing life of local churches in the Christian movement, and today's pastors are still called to be shepherds after God's own heart, to lead his people, living on the margins of settled society, to their eternal home. In this New Studies in Biblical Theology volume, Laniak draws on a wide range of Old and New Testament texts to develop the biblical theology of "shepherd" imagery, and concludes with some principles and implications for contemporary pastoral ministry. A wonderful resource for pastors, teachers and seminary students, as well as readers interested in the study of biblical imagery. Addressing key issues in biblical theology, the works comprising New Studies in Biblical Theology are creative attempts to help Christians better understand their Bibles. The NSBT series is edited by D. A. Carson, aiming to simultaneously instruct and to edify, to interact with current scholarship and to point the way ahead.

Timothy Laniak is associate professor of Old Testament and coordinator of the Urban Ministry Certificate Program at Gordon-Conwell Theological Seminary, Charlotte, North Carolina. He is author of Shame and Honor in the Book of Esther (Scholars Press, 1998) and "Esther" in Ezra-Nehemiah-Esther (NIBC, 2003).

▼▲
The New Studies in Biblical Theology series has proven to be one of the more theologically fruitful academic endeavors in evangelical scholarship over the past half-century. D.A. Carson is the series editor and he also provides a concise, well-written foreword to this current volume. Timothy Laniaks work develops a biblical theology of the shepherd metaphor throughout the Scriptures. And as Carson notes, This entails careful listening to a large number of remarkably disparate texts, with the aim of understanding how shepherd imagery functions in each and corpus of the Bible. Then it demands a careful attempt to delineate how such imagery develops over time (p. 11). Laniak is indeed a careful listener, reader, and synthesizer of such disparate texts.
The book begins with a rich, albeit difficult, examination of the metaphor. This is a scholarly, semi-advanced level discussion, but shouldnt dissuade the average reader from plowing through the rough terrain. Because on the other side, he will find lush pasture of historical summary of the ways in which ancient near eastern cultures used the shepherd imagery to define peoplehood and leadership.
From that point on, the book dives into the Bible, concentrating the majority of its efforts on the Old Testament. It begins with a two-fold foundation-laying analysis of shepherd imagery in the Exodus wilderness and the Davidic monarchy narratives. Laniak notes that these histories provide the paradigm for the Bibles later use of pastoral imagery. Writing on the prophets, Laniak provides great insights on longer passages (even whole books), like Ezekiel 34, demonstrating exemplary exegesis that results in theological and practical rewards for the attentive reader. He focuses on the key to the shepherd imagery: The divine preference for human [emphasis added] is amazingly resilient. As he observes, the portrayal of human leadership is radically theocentric, with the vision of YHWH seated on his throne overwhelming the merely delegated authority of appointed men. This holds true not only in Ezekiel but throughout the Bible. The shepherd-leader is in charge of the Lords flock. It is in this spiritual context that one is to understand the severe judgments upon false shepherds who exploit, neglect, and abuse Gods people. However, in each case, the prophets end with a dimension of hope, pointing forward to a new covenant wherein the Mosaic Covenant will be reinvigorated, a remnant of the faithful gathered, righteous and just human shepherds appointed, and wherein YHWH will be enthroned in Zion.
The handling of New Testament texts is equally incisive and compelling. He examines the Gospels, 1 Peter, and Revelation. However, one should be mindful that Laniak sees great continuity between Israel and the church, and this at times skews his exegesis. He sees the Gospels, particularly Mark, as equating Jesus with Israel. Other points of continuity, such as prophetic fulfillments and similar heart-attitudes/concerns between YHWH (in the OT) and Jesus are entirely valid.
The practical benefits of this book are great. One can readily apply the exegetical and theological insights gained from the texts studied to the sphere of our post-NT era ecclesiology. Such an exegetically powerful book provides a sure biblical foundation for implementing the shepherd imagery and all of its associations in real-life ministry.  Jason Park, Christian Book Previews.com

This book is a must-read for both ministers and scholars.

▼▲
I'm the author/artist and I want to review Shepherds After My Own Heart: Pastoral Traditions and Leadership in the Bible (New Studies in Biblical Theology).
Back
Back