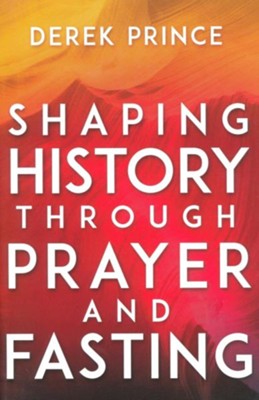 ▼▲
Become a World-Shaper. The times we are living in are scary, to say the least. The world is unstable. Global politics are volatile. The rate of change we now experience is spiraling out of control. We’re uncertain about what will happen tomorrow, and we feel helpless to do anything about it. Yet what we are facing isn’t new. In the past, there have been many wars. There have been threats and acts of terrorism. History is spotted with violent episodes of unimaginable carnage and horror. And what did people do about them? The only thing they could do: they prayed!  Discover with Derek Prince how your prayers and fasting can change the world. Using experiences from his own life, he illustrates how you can make a difference. You don’t have to fight. You don’t have to hold high political position. You don’t have to be a certain age. You don’t even have to have power, money, or influence on earth. What is important is your influence in heaven. Learn to touch the heart of God through prayer—prayer that will change the world!

▼▲
Bible scholar and spiritual patriarch, Derek Prince (1915–2003) was educated as a scholar of classical languages at Eton College and Cambridge University in England, and later at Hebrew University in Israel. While serving with the British army in World War II, he began to study the Bible as a philosophical work and, as a result, experienced a life-changing encounter with Jesus Christ. Derek Prince taught and ministered on six continents for more than sixty years, imparting God’s revealed truth, praying for the sick, and sharing his prophetic insights. He is the author of more than eighty books, six hundred audio teachings, and one hundred video teachings, many of which have been translated and published in more than one hundred languages.
www.derekprince.com

▼▲
I'm the author/artist and I want to review Shaping History Through Prayer and Fasting / Enlarged edition.
Back
×
Back
×