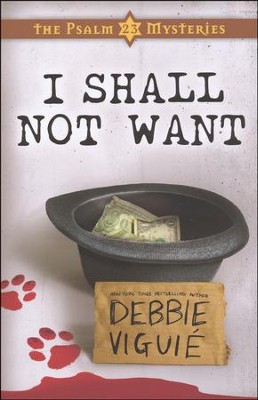 I Shall Not Want, Psalm 23 Mysteries Series #2

▼▲
Charity work can be murder!

It's Thanksgiving and Joseph Tyler, one of the members of Cindy's church, has organized a new charity that provides homeless people with rescue dogs to love and care for. But one by one, the homeless recipients are being murdered and their dogs stolen. Could an overly competitive millionaire with his prize-winning pooches and a grudge be behind the crimes? Or could it be someone much closer to Joseph who has something sinister to hide? Cindy and Jeremiah must rush to find a killer before he strikes again.

▼▲
Debbie Vigui&eacute; is the New York Times bestselling author of more than two dozen novels. Debbie writes dark fantasy, mysteries, and thrillers including The Psalm 23 Mysteries and the Kiss trilogy. When Debbie isn’t busy writing she enjoys spending time with her husband, Scott, visiting theme parks. They live near Orlando, Florida with their cat, Schr&ouml;dinger.

▼▲
In I Shall Not Want, the second installment in The Psalm 23 Mysteries, Debbie Viguié creates a unique murder mystery revolving around the biblical notion that the Lord will provide in any situation. Finding herself at murder scene after murder scene during the week preceding Thanksgiving, Cindy Preston must learn to take risks and confront the unknown. I Shall Not Want explores Cindys emotions and reactions as she is pushed beyond her comfort zone to solve a mystery before it claims additional lives.

Though the novel focuses primarily on the character development of Cindy, it switches between the points of view of Cindy, her friend Jeremiah the rabbi, and detective Keith. This creates an interesting combination of perspectives from which readers perceive the murders, giving insight into the lessons that each character learns from the situation. The mystery in I Shall Not Want begins when dogs from a charity event for the homeless begin disappearing, many of their new owners left for dead. Cindy subsequently finds herself in a community with several homeless people, learning to find the humanity in each as she reaches out to them with the very same generosity that Christ shows to the less fortunate citizens of the world. During the week, as the crimes worsen and the perplexity of the plot deepens, Cindy is thrown through many twists and turns, including an absolutely baffling arrest in the middle of Thanksgiving dinner.

As dog owners are killed and their helpless dogs kidnapped, Cindy and her friends are challenged to piece together the motive behind these atrocities. Why are the victims, including a seemingly innocent secretary and many homeless people, targeted? Why are the dogs from Josephs charity event taken, some of them only to be returned untouched? These and other questions must be answered before any justice can be served. In the meantime, Viguié also provides a look into the development of Cindys character, taking her through several new, risky adventures, including speed dating, a service project with her churchs youth group, and hosting Thanksgiving dinner for friends and strangers alike. Along the way, Cindy learns to embrace these experiences with the confidence that God will provide, ultimately making a life-threatening decision in attempt to save the day. With the help of Jeremiah, Cindy learns an important lesson from Psalm 46:10, to Be still and know that I am God. In the midst of the chaos that surrounds her, Cindy finally learns to relax and surrender all control to God, knowing that He will provide.

Overall, Viguié creates a fresh take on the typical murder mystery, tweaking it here and there to reflect Christian values. Whereas the plot moves a bit slowly after its initial shocking beginning, it certainly has its thrilling scenes. This book is recommended for murder mystery fans, especially those looking for less graphic options with a strong focus on character development, or for those looking to be reassured that the Lord will, indeed, provide, even in the most life-threatening situations.  Erica Gleason, www.ChristianBookPreviews.com

▼▲
I'm the author/artist and I want to review I Shall Not Want, Psalm 23 Mysteries Series #2.
Back
Back