Shake the World
By: D. Corban 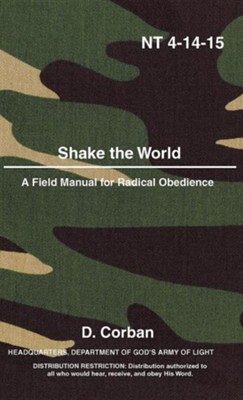 ▼▲
Shake the World contains the distilled biblical guidance that will take the believer from ground zero to victory in the war against sin. In the military we have more doctrine then any officer could read in a twenty-year career. Army doctrine comes in the form of Army Regulations, Technical Manuals, and Field Manuals. It is the Field Manuals that have something we can actually use when an unseen enemy surprises our position. Shake the World is pragmatic and honest, based on the absolute authority of God's Word. The Lord gave us three standing orders: Love God completely, love others as yourself, and prepare the way of the Lord. The time has come. Cpt. Corban led teen boys in Jesus' Special Operations Cell (J.S.O.C.) as a youth pastor, using this book as a lesson plan. He has been a Probation Officer in New York City, in Family and Criminal Courts. He has been a Federal Corrections Officer in the sections housing the worst offenders, and saw the difference one Christian Soldier makes. His military career has spanned the ranks from private to captain, and has covered the globe. He has been married 19 years, and is the humble father of four boys and three girls from 17 years to 7 months. He has known the face of the enemy - in poverty and abundance, war and peace, health and disease, at home and abroad, in scores of cultures. His hope is that he has stumbled across the right words to enlist your help in Shaking the World through radical obedience to God. The author can be reached at NT41421@Aol.com, and soon through his website www.JesusSOC.com (currently under construction).

▼▲
I'm the author/artist and I want to review Shake the World.
Back
×