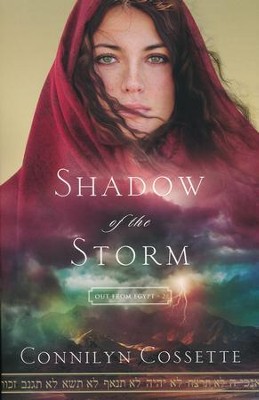 Shadow of the Storm #2

Shadow of the Storm #2, from the Out From Egypt series, by Connilyn Cossette

Shira escaped Egypt during the Exodus aong with the other Hebrews to live in freedom. She defies her mother and takes an opportunity to learn the arts of midwifery. She enjoys assisting with delivering babies.  Her life starts to go down hill when a delivery goes terribly wrong and she becomes the focus of a woman out for revenge. Shira has kept the heartbreak of her past hidden. How can she let go of her past?

▼▲
In the Depth of the Storm's Shadow, Only Truth Can Light Her Way


Having escaped Egypt with the other Hebrews during the Exodus, Shira is now living in freedom at the foot of Mt. Sinai, upon which rests the fiery glowing Cloud containing the shekinah glory of God. When the people disobey Yahweh and build a golden idol, the ensuing chaos gives Shira an unexpected opportunity to learn the arts of midwifery. Although her mother wishes for her to continue in the family weaving trade, Shira's gifts shine brightest when she assists with deliveries. In defiance of her mother, Shira pursues her heart's calling to become an apprentice midwife.

When a delivery goes horribly wrong, Shira finds herself bound to a man who betrayed her, the caretaker of three young children, and the target of a vengeful woman whose husband was killed by Shira's people, the Levites. As contention between the Hebrew tribes and the foreigners fans the flames of another dangerous rebellion, Shira will come face-to-face with the heartbreak of her past that she has kept hidden for so long. How can she let go of all that has defined her to accept the love she's denied herself and embrace who she truly is?

▼▲
When she is not homeschooling her two sweet kids (with a full pot of coffee at hand), Connilyn Cossette is scribbling notes on spare paper, mumbling about her imaginary friends, and reading obscure, out-of-print history books. There is nothing she likes better than digging into the rich, ancient world of the Bible and uncovering buried gems of grace that point toward Jesus. Although a Pacific Northwest native, she now lives near Dallas, Texas. Connect with her at www.connilyncossette.com.

▼▲
I'm the author/artist and I want to review Shadow of the Storm #2.
Back
Back