EASTER SEASON SALE: Over 1,100 deals up to 75% off. Shop through March 30th. >
The Shadow of the Sword: The Birth of Islam and the Rise of the Global Arab Empire - eBook
By: Tom Holland 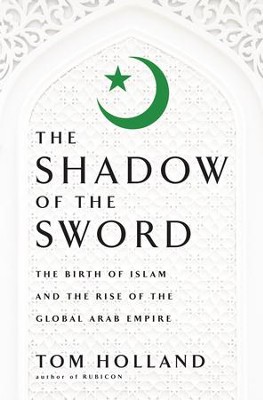 The Shadow of the Sword: The Birth of Islam and the Rise of the Global Arab Empire - eBook

Tom Holland is a historian of the ancient world and a translator. His books include Rubicon: The Triumph and Tragedy of the Roman Republic, Persian Fire, In the Shadow of the Sword and The Forge of Christendom. He has adapted Homer, Herodotus, Thucydides and Virgil for the BBC. In 2007, he was the winner of the Classical Association prize, awarded to "the individual who has done most to promote the study of the language, literature and civilization of Ancient Greece and Rome." He lives in London with his family.
Visit the author's website at www.tom-holland.org.

▼▲
Praise for In the Shadow of the Sword:

"[Tom Holland's] conclusions may be tentative, but they are convincing. His book is elegantly written and refreshingly free from specialist jargon. Marshaling its resources with dexterity, it is a veritable tour de force."—Malise Ruthven, Wall Street Journal

"Those unwilling to struggle through academic texts have long needed a guide to the story of Islam as it's understood by those with the fullest access to the latest linguistic and archaeological evidence. Now at last in Tom Holland's In the Shadow of the Sword, they finally have it.... Holland—author previously of Rubicon and Persian Fire—is about as exciting a stylist as we have writing history today.... [This book is] accessible but delightful...as fun to read as any thriller, and with far richer intellectual nutritional content."—David Frum, Daily Beast


"The life of Muhammad and the rise of Islam are boldly re-examined in this brilliantly provocative history.... [An] ambitious and...important book.... Holland is a skilful and energetic narrator, and while he guides us along the more intricate twists and turns of the period, he also keeps our eyes on the bigger story."—Anthony Sattin, Guardian Observer (London)


"[An] elegant study of the roiling era of internecine religious rivalry and epic strife that saw the nation of Islam rise and conquer.... Holland confronts questions in the Quranic text head-on, providing a substantive, fluid exegesis on the original documents. Smoothly composed history and fine scholarship."—Kirkus Reviews


"This is a book of extraordinary richness. I found myself amused, diverted and enchanted by turn. For Tom Holland has an enviable gift for summoning up the colour, the individuals and animation of the past, without sacrificing factual integrity. He writes with a contagious conviction that history is not only a fascinating tale in itself but is a well-honed instrument with which we can understand our neighbours and our own times, maybe even ourselves. He is also a divertingly inventive writer with a wicked wit – there's something of both Gibbon and Tom Wolfe in his writing... [and] he possesses a falcon eye for detail.... [A] spell-bindingly brilliant multiple portrait of the triumph of monotheism in the ancient world."—Barnaby Rogerson, the Independent (London)


"This dramatic investigation of the origins of Islam is both a thrilling narrative history and a compelling piece of detective work.... A compelling detective story of the highest order, In the Shadow of the Sword is also a dazzlingly colourful journey into the world of late antiquity. We encounter brain-eating demons; a caliph with such oral-hygiene problems that he could kill a fly with one breath; and that old favourite, St
Simeon Stylites, rotting away on his pillar but still managing to miraculously cure a man with unfeasibly large testicles, "like a pair of clay jars". Every bit as thrilling a narrative history as Holland's previous works, In the Shadow of the Sword is also a profoundly important book. It makes public and popular what scholarship has been
discovering for several decades now: and those discoveries suggest a wholesale revision of where Islam came from and what it is."—Christopher Hart, Sunday Times (London)


"[M]agnificent...and brave....The historian and author of Rubicon and Persian Fire has now, after five years’ work, come up with In the Shadow of the Sword. His story is so compellingly told that it could almost be Dan Brown, except that Holland writes brilliantly, with a simultaneously dashing, meticulous and at times ravishingly camp style, and his tale is true."—Michael Bywater, The Week (London)


"Tom Holland is a writer of clarity and expertise, who talks us through this unfamiliar and crowded territory with energy and some dry wit.... [T]he emergence of Islam is a notoriously risky subject, so a confident historian who is able to explain where this great religion came from without illusion or dissimulation has us greatly in his debt."—Philip Hensher, The Spectator (London)

Praise for The Forge of Christendom

"An entertaining account of the fraught last years of the Dark Ages."— The Wall Street Journal

"An enjoyable and exuberantly argued book . . . Holland combines sound scholarly credentials with a gift for storytelling on a magisterial scale . . . In a tightly woven and sometimes witty narrative, [Holland demonstrates] the subtle interplay of genuine religious sentiment and cynical power politics."—The Economist

"[This] is narrative history in the grand manner, written with the panache and confidence we associate with the great historians of the 18th and 19th centuries."—Allan Massie, The Daily Telegraph

"Excellent . . . Holland is a cool-headed historian who writes here no less authoritatively and engagingly on classical Greece than he did on ancient Rome in his last book, Rubicon."—Mary Beard, The Times Literary Supplement

"It is . . . a testament to Holland’s superlative powers as a narrative historian that he brings this tumultuous, epoch-making period dazzlingly to life, and makes the common reader familiar again with one of the most thrilling periods in world history." —William Napier, The Independent

"Not since Ronald Syme's The Roman Revolution has there been such an original and enlivening piece of Roman history. Tom Holland has the rare gift of making deep scholarship accessible and exciting. A brilliant and completely absorbing study."—A.N. Wilson

"A book that really held me, in fact, obsessed me . . . Narrative history at its best." –Ian McEwan, The Guardian, Books of the Year

▼▲
I'm the author/artist and I want to review The Shadow of the Sword: The Birth of Islam and the Rise of the Global Arab Empire - eBook.
Back
×
Back
×