EARLY CHRISTMAS SALE: Shop over 900 items up to 85% off through 9/29 >
The Seven-Day Scholar: The Civil War: Exploring History One Week at a Time - eBook
By: Dennis Gaffney, Peter Gaffney 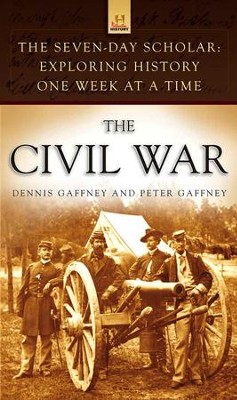 The Seven-Day Scholar: The Civil War: Exploring History One Week at a Time - eBook

▼▲
"A bite of history a day, all year long." Flawless storytelling, expert research, and a whole new way of providing history in intriguing, one-page essays makes The Seven-Day Scholar: The Civil War a book that anyone interested in the topic will want on their bookshelf. This volume in the Seven-Day Scholar series brings to life significant moments in our nation's heroic tragedy, the Civil War, and coincides with its 150th anniversary. The book is organized into fifty-two chapters, corresponding to the weeks in a year; and each week has a theme-what ignited the war, Antietam, soldiers' food and drink, the 54th Massachusetts, the Gettysburg Address, Vicksburg, medical care, Lincoln's assassination, why the North won, and many more. Each chapter includes seven related narrative entries, one for every day of the week. These one-page entries, which read like historical fiction, bring to life crucial political decisions, unforgettable people, key battlefield moments, scholarly debates, and struggles on the home front. The book also explores many little-known episodes, answering questions such as: Entries also include follow-up resources where curious readers can learn more. Readers can sweep through the book from beginning to end, or use it as a reference book, periodically dipping in and out of topics they want to explore. This is the perfect book for history buffs, and for those who missed out on learning about this captivating period in American history.

▼▲
I'm the author/artist and I want to review The Seven-Day Scholar: The Civil War: Exploring History One Week at a Time - eBook.
Back
×
Back
×