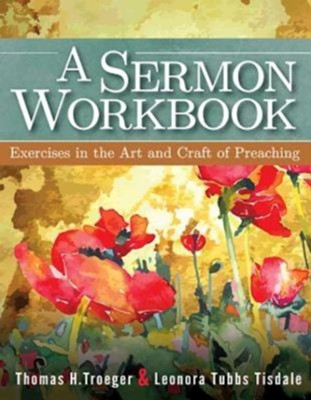 A Sermon Workbook: The Art and Craft of Preaching - eBook

▼▲
Both experienced and novice preachers need a new approach for sermon development skill-building. A Sermon Workbook offers a unique and flexible resource that is instantly accessible and useful for anyone tasked with the proclamation of the Word. The workbook format can be used in a linear fashion, beginning to end. Or readers can pick and choose the chapters to tailor-fit their own needs. In either case, readers build skill upon skill, working through inventive and engaging exercises first developed and taught at Yale Divinity School. The book addresses the skills and arts that are essential for effective preaching in our multi-tasking, multi-ethnic, sound-bite society. It offers theological clarity about why we preach, and what matters most. The creative, collaborative, and charming authors present the principles as they do in their classroom: in two voices—one male and one female--with the two complementing and supporting one another.

Leonora Tubbs Tisdale is the Clement-Muehl Professor Emerita of Divinity (Preaching) at Yale Divinity School. Her research and teaching interests include: prophetic preaching, women and preaching, and congregational studies and preaching. She is the author or editor of twelve books, including Preaching as Local Theology and Folk Art, Prophetic Preaching: A Pastoral Approach, and A Sermon Workbook: Exercises in the Art and Craft of Preaching.  She edited three volumes of the Abingdon Women’s Preaching Annual.  She also served as one of the authors of The History of the Riverside Church in New York City, writing the chapter on that church’s rich preaching and worship history. Her recent devotional book, The Sun Still Rises: Meditations on Faith at Midlife, was written over the span of 14 of her own midlife years.

Before beginning her tenure at Yale, Professor Tisdale served on the faculties of Princeton Theological Seminary, Union Presbyterian Seminary in Virginia (now Union Presbyterian Seminary), and as adjunct faculty at Union Theological Seminary in New York. She has been a pastor in congregations ranging in size from 33 to several thousand. While on the pastoral staff of Fifth Avenue Presbyterian Church in New York City, she directed a lay seminary that offered courses for over 2000 people in the greater NYC area.  Professor Tisdale is a former president of the Academy of Homiletics, the professional society for North American teachers of preaching, who presented her with a Lifetime Achievement Award in 2018.  She is an ordained minister in the Presbyterian Church (U.S.A.)  She is now retired and living with her husband Alfred in Durham, NC, close to extended family.

Thomas H. Troeger, Lantz Professor emeritus Yale Divinity School and Institute of Sacred Music, has written 24 books in the fields of preaching, poetry, hymnody and worship. His most recent books include: Song that Blesses Earth: Hymn texts, carols, and poems; A Sermon Workbook: Exercises in the Art and Craft of Preaching (with Nora Tubbs Tisdale); Music as Prayer: The Theology and Practice of Church Music.  He is also a flutist and a poet whose work appears in the hymnals of most denominations and is frequently set as choral anthems. Professor Troeger has a B.A. Yale University; B.D. Colgate Rochester Divinity School.  In 2014 the University of Basel, Switzerland, awarded him an honorary doctorate in theology for his international work in homiletics and his development of "a contemporary religious language which does justice to both aesthetic and theological demands."  In 2016 he gave the Beecher Lectures at Yale on which his latest book, The End of Preaching, is based.  Ordained as a priest in the Episcopal Church and as a minister in the Presbyterian Church, he is now retired and living in Falmouth, Maine.

▼▲
I'm the author/artist and I want to review A Sermon Workbook: The Art and Craft of Preaching - eBook.
Back
×
Back
×