EARLY CHRISTMAS SALE: Shop over 900 items up to 85% off through 9/29 >
Saving the Holy Sepulchre: How Rival Christians Came Together to Rescue their Holiest Shrine
By: Raymond Cohen 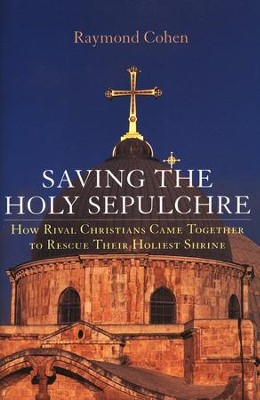 Saving the Holy Sepulchre: How Rival Christians Came Together to Rescue their Holiest Shrine

▼▲
"For much of the 20th century, the Church of the Holy Sepulchre in Jerusalem, revered as the location of Christ's crucifixion and burial, was in danger of collapsing. Cohen describes step-by-step how Armenian Orthodox, Greek Orthodox, and Roman Catholics finally worked together to preserve the shrine,"---Publishers Weekly. 320 pages, hardcover.

▼▲
The Church of the Holy Sepulchre is the mother of all the churches, erected on the spot where Jesus Christ was crucified and rose from the dead and where every Christian was born. In 1927, Jerusalem was struck by a powerful earthquake, and for decades this venerable structure stood perilously close to collapse.

In Saving the Holy Sepulchre, Raymond Cohen tells the engaging story of how three major Christian traditions--Greek Orthodox, Roman Catholic, and Armenian Orthodox--each with jealously guarded claims to the church, struggled to restore one of the great shrines of civilization. It almost didn't happen. For centuries the communities had lived together in an atmosphere of tension and mistrust based on differences of theology, language, and culture--differences so sharp that fistfights were not uncommon. And the project of restoration became embroiled in interchurch disputes and great power politics. Cohen shows how the repair of the dilapidated basilica was the result of unprecedented cooperation among the three churches. It was tortuous at times--one French monk involved in the restoration exclaimed: "I can't take any more of it. Latins--Armenians--Greeks--it is too much. I am bent over double." But thanks to the dedicated efforts of a cast of kings, popes, patriarchs, governors, monks, and architects, the deadlock was eventually broken on the eve of Pope Paul VI's historic pilgrimage to the Holy Land in 1964.

Today, the Church of the Holy Sepulchre is in better shape than it has been for five hundred years. Light and space have returned to its ancient halls, and its walls and pillars stand sound and true. Saving the Holy Sepulchre is the riveting story of how Christians put aside centuries of division to make this dream a reality.

Raymond Cohen is Chaim Weizmann Professor of International Relations at the Hebrew University of Jerusalem. A graduate of Oxford University, he has been a visiting professor at Georgetown University, and a research fellow at the U.S. Institute of Peace and the Watson Institute at Brown University.

▼▲
Probably few of the pilgrims and tourists who visit the Church of the Holy Sepulchre in Jerusalem are aware that for much of the 20th century the building, revered as the location of Christ's crucifixion and burial, was in danger of collapsing. In this meticulous, evenhanded account, Cohen (professor of international relations at the Hebrew University of Jerusalem) describes step-by-step how the three major faith communities in the church (Armenian Orthodox, Greek Orthodox and Roman Catholic) finally worked together to preserve this shrine in spite of doctrinal differences, property disputes, brawls, lack of funds and the complicated politics of the Middle East. Their goal, according to Cohen, was not "interchurch reconciliation" or conflict resolution but conflict management; most astonishing is the perseverance of all parties involved over a span of decades. While his concluding analysis of the project's eventual success in terms of international relations principles seems too brief, Cohen's chronological approach and strong writing maintain suspense in spite of the outcome promised in the book's title. His tale offers hope that ancient sites can be preserved in spite of seemingly impossible odds. (Mar.) Copyright 2008 Reed Business Information.

"Raymond Cohen's book traces in meticulously annotated detail the bumpy road traveled by the Christian denominations with claims to space inside the church whose foundations go back to the fourth century, to assert those claims. Chronicling complexities that make a Gordian knot look like a slip tie, Cohen, a professor of international relations at the Hebrew University, traces a process that began with insistence on preeminence and reached a point of making do with negotiated condominium, to reconstruct the crumbling complex, culminating in the dedication in 1997 of the new dome over the tomb." --Haaretz
"...meticulous, evenhanded account Cohen's chronological approach and strong writing maintain suspense in spite of the outcome promised in the book's title. His tale offers hope that ancient sites can be preserved in spite of seemingly impossible odds." --Publisher's Weekly
"A terrific story, told very well." --Rodney Stark, author of Victories of Reason: How Christianity, Freedom, and Capitalism Led to Western Success
"Saving the Holy Sepulchre tells a story of intrigue and tangled diplomacy that no novelist would invent. The book tells us a great deal about interfaith relations, about the preservation of antiquity, and about the Middle East - but the best reason to read it is that it offers a fascinating story, eloquently told." --Philip Jenkins, author of God's Continent: Christianity, Islam, and Europe's Religious Crisis
"A dramatic account told with zest and backed by careful research." --First Things
"Cohen not only has done the sort of properly conducted historical research that is rarely done on institutions with such huge religious stakes, but also...manages to make the detailed story of bickering and nastiness so riveting." --Church History
"Cohen's work of tracing this complex and unseemly history is a marvel of scholarship." --ooks and Culture
"Saving the Holy Sepulchre is a complete and very useful accounting of the modern history of the church. It is more than just a story about fixing a building; it is one that reflects the contentious nature of centuries-old claims of religious dominance in Jerusalem and international claims on holy places." --Middle East Quarterly
"Cohen writes in a particularly readable and witty style--a literary achievement that should not be taken for granted. He presents all the 'dramatis personae,' bringing them to life and placing them within the cultural and political settings in which they labored. Likewise, he is to be commended for his mastery of the topography, archaeology, and architecture of the site, as well as for his coherent analysis of architectural plans and debates, which he presents (for what is a presumably a nonspecialist audience) in a very clear manner."--The Protestant-Jewish Conundrum

▼▲
I'm the author/artist and I want to review Saving the Holy Sepulchre: How Rival Christians Came Together to Rescue their Holiest Shrine.
Back
×
Back
×