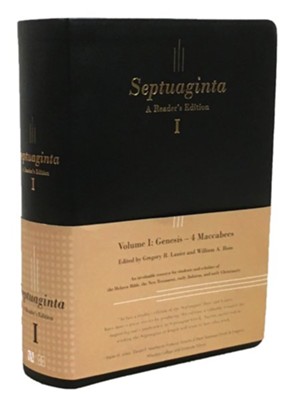 Septuaginta: A Reader’s Edition offers the complete text of the Greek Old Testament as it appears in the Rahlfs-Hanhart revised Septuaginta, laid out in a clear and readable format. All deuterocanonical books are included, as well as all double-texts, which are presented on facing pages for easy textual comparison. In order to facilitate natural and seamless reading of the text, every word occurring 100 times or fewer in the Rahlfs-Hanhart text (excluding proper names)—as well as every word that occurs more than 100 times in the Rahlfs-Hanhart text but fewer than 30 times in the Greek New Testament—is accompanied by a footnote that provides a contextual gloss for the word and (for verbs only) full parsing. Additionally, an appendix provides a complete alphabetized list of common vocabulary (namely, all the words that are not accompanied by a footnote), with glosses and (as applicable) comparison of a word’s usage in the Septuagint to its usage in the New Testament.

All of these combined features will make Septuaginta: A Reader’s Edition an indispensable resource for biblical scholars and an excellent tool for improving one’s comprehension of the Greek language. In addition to the attractive and high-quality binding, each volume will include two ribbon markers.

"The Septuagint is one of the most important ancient texts of the Bible, the earliest and most widely used in antiquity. For students, reading it can be a challenge since its Greek is unfamiliar and much of its vocabulary rare. Now at last we have this excellent resource from Ross and Lanier, clearly laid out on the page with carefully chosen glosses for infrequent words in the notes at the bottom. It is presented in such a readable way that this will be the Greek Bible everyone should have on their desk."
James K. Aitken, Reader in Hebrew and Early Jewish Studies, University of Cambridge

"At last a reader's edition of the Septuagint! Ross and Lanier have done a great service by producing this edition. A valuable resource for improving one's proficiency in Septuagint Greek. Anyone interested in reading the Septuagint at length will want to have this on their desk." Karen H. Jobes, Gerald F. Hawthorne Professor Emerita of New Testament Greek & Exegesis, Wheaton College and Graduate School

"Septuaginta: A Readers Edition fills a gap in scholarly tools for Septuagint study. It is well designed and easy to use. The editors provide clear and appropriate glosses for less common words, and the inclusion of the Greek text eliminates the need for using multiple books. The appendix of common Septuagintal words, along with a comparison with New Testament usage, is an ideal point of access for New Testament students, facilitating their introduction to a different Greek corpus. This reader is an invaluable tool, and I would highly recommend it for my students and anyone wishing to read broadly in the Septuagint."
Sean A. Adams, Senior Lecturer in New Testament and Ancient Culture, University of Glasgow

"With the publication of Hendrickson's Reader's Edition of the Septuagint, there is now a hands-down, clear choice of a recommended printed text of the LXX for seminary students and pastors. Tolle. Lege."
Robert L. Plummer, Professor of New Testament Interpretation, The Southern Baptist Theological Seminary, and founder and host of Daily Dose of Greek screencast

"While the Hebrew Bible remains our best point of entry into the Old Testament in its original historical setting, readers of the New Testament very much need to grow in their familiarity with the other Old Testament, the Septuagintwhich for most early Christians outside of Israel was not the other, but the Old Testament! And there is no greater path to becoming familiar with the Septuagint than picking it up and reading it. I am so pleased that Drs. Lanier and Ross have prepared, and that Hendrickson has supported the publication of, this important resource that will so greatly facilitate that simple but essential act for all who have completed a basic course in Greek."
David A. deSilva, Trustees' Distinguished Professor of New Testament and Greek, Ashland Theological Seminary

"There are few things more important for better understanding the New Testament and the development of early Judaism and early Christianity than the Septuagint. It delights my heart to imagine students at the breakfast table, on a train, or resting under a tree reading the Septuagint in Greek. My well-worn New Testament 'Reader's Edition' will now have a steady companion!"
Nijay K. Gupta, Associate Professor of New Testament, Portland Seminary

"This edition is a significant step forward to making the Septuagint text more accessible for students of the Bible. Often, the cumbersome task of having to look up words in a dictionary distracts the student from the valuable experience of a continuous and undisturbed flow of reading. Lanier and Ross succeed in freeing us from those obstacles and making the Greek text an enjoyable read!"
Myrto Theocharous, Professor of Hebrew and Old Testament, Greek Bible College, Athens, Greece

"Lanier and Ross are to be congratulated and thanked for their huge efforts in producing this wonderful resource. Now the Septuagintthat incredibly important corpus for understanding the New Testament and Second Temple Judaism, and the Bible of the very first Christianscan be read easily and with profit by anyone who has a year of Greek under their belt. All students of Greek should be encouraged to read and study the Septuagint, and this is now the number one resource to help them to do so."
Constantine R. Campbell, Professor of New Testament, Trinity Evangelical Divinity School

"Following in the tradition of A Reader's Hebrew Bible and A Reader's Greek New Testament (both published by Zondervan) and of Biblia Hebraica Stuttgartensia: A Reader's Edition (Hendrickson) and The UBS Greek New Testament: A Reader's Edition (Deutsche Bibelgesellschaft), Gregory R. Lanier and William A. Ross have created Septuaginta: A Reader's Edition (Hendrickson). The Greek text employed is that of Alfred Rahlfss Septuagintaa popular editio minor, or semi-critical edition, based on codices Vaticanus, Sinaiticus, and Alexandrinusfirst published in 1935 and then re-issued with minor revisions in 2006 by Robert Hanhart (Deutsche Bibelgesellschaft). The two-volume set by Lanier and Ross promises to be a very useful tool, especially for students, pastors, and all those who are interested in enhancing their ability to read the Greek version of the Scriptures and the apocryphal/deuterocanonical books that was studied by Jews and Christians during the Graeco-Roman period, including the authors of the New Testament and the Early Church Fathers, who frequently quoted from or were otherwise influenced by it. Septuaginta: A Reader's Edition features on each page a glossary of words that occur 100 times or fewer in the Septuagint text and those that occur more than 100 times but fewer than 30 times in the Greek New Testament, full parsing information for verbs, and an appendix with a list of all words and their glosses not found in the page-by-page glossary. May this publication further stimulate the resurgent interest in the Septuagintthe earliest translation in the long textual history of the Jewish Scriptures!"
Robert J. V. Hiebert, Professor of Old Testament, Trinity Western University, Director of the John William Wevers Institute for Septuagint Studies, and President of the International Organization for Septuagint and Cognate Studies

"Thanks to the rapid output of new work on the Septuagint in recent years, we are now well provided with introductions, commentaries, and lexicons to aid a closer study of the corpus and its individual books.

What has been lacking until now is a tool to enable the biblical specialist, or the interested non-specialist, to approach the Septuagint as a literary text to be read continuously like any other. Experts in, and students of, the Old and New Testaments and Hellenistic Judaism, as well as classical scholars interested in the literature of Koine Greekof which the Septuagint is increasingly recognised as being a substantial but little exploited partwill surely benefit from having this omission rectified.

Hendrickson Publishers are thus to be commended for undertaking the publication of Gregory Lanier's and William Ross's attractive new two-volume edition of the Septuagint: Septuaginta: A Reader's Edition. This innovative work supplies a resource comparable to the readers editions of the Old and New Testaments already in existence and in so doing bridges an obvious gap. Those with scholarly and/or pastoral interest in obtaining a holistic view of the biblical texts used by the first Christians, including the New Testament writers, will be particularly well served.

There is, in fact, a precedent for the new venture, although it is only a partial one. In 1905, F. C. Conybeare and St George Stocksurely ahead of their timeended their slim Grammar of Septuagint Greek with a selection of 'Readings.' These consisted of lengthy narrative passages, presented as 'Stories,' ranging from the Joseph narrative in Genesis to 'The Story of Hezekiah and Sennacherib' in 4 Reigns. Each page has succinct grammatical and exegetical footnotes, but the focus remains on the text itself as narrative. This was a pioneering work, 'dealing with the Septuagint in and for itself,' as the authors themselves recognised in their Preface. Hendrickson Publishers, too, recognised the significance of the undertaking (which remained largely without imitators until recent times) by issuing a user-friendly reprint of the Grammar with its Selected Readings in 1995. Based on Swete's text, however, and covering only a handful of narrative passages, the daring venture could be of only limited usefulness.

But now, with Septuaginta: A Reader's Edition, nothing less than the entire Septuagint is made available for 'natural and seamless reading.' The text used throughout is that of Ralhfs-Hanhart. To facilitate reading, each book is divided into paragraphs with English headings ('Naomi Is Widowed' [Ruth 1:16]; 'Ruth's Loyalty to Naomi' [Ruth 1:719] and so on). No translation is provided and there are no exegetical notes. Instead, there is a 'glossary' at the foot of each page, helpfully tagged by numbers to the relevant items in the text. The meaning of words less commonly found in either the Septuagint or New Testament is given in citation form, while verbal forms are parsed. In case of need, an alphabetical appendix gives the meanings of all other words not glossed as footnotes, although a fair competence in Greek on the reader's part is assumed. Reducing the amount of vocabulary glossed on each page in this way helps to keep the reader's focus on the text while providing quick and easy reference when required. Readers who wish, or need, to unravel the text further (for textual issues, questions of translation, comparison with New Testament usage, and so on) have many excellent scholarly resources upon which to draw. The present volume, however, provides its readers with a reliable, uncluttered entry into the world of the Septuagint in all its literary and religious variety and will enable them to savour the (often strange) idioms and thought of this living monument of the Koine Greek to which the New Testament also belongs."
Dr. Jennifer Dines, University of Cambridge

William A. Ross is a doctoral candidate in Old Testament at the Faculty of Divinity, University of Cambridge.

▼▲
I'm the author/artist and I want to review Septuaginta: A Reader's Edition - Flexisoft black, 2 volumes.
Back
×
Back
×