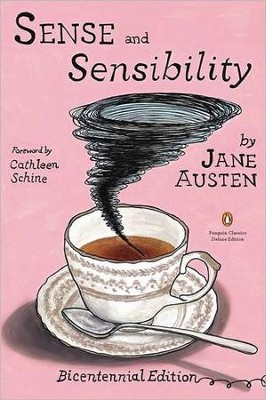 Marianne Dashwood wears her heart on her sleeve, and when she falls in love with the dashing but unsuitable John Willoughby she ignores her sister Elinor's warning that her impulsive behaviour leaves her open to gossip and innuendo. Meanwhile Elinor, always sensitive to social convention, is struggling to conceal her own romantic disappointment, even from those closest to her. Through their parallel experience of love - and its threatened loss - the sisters learn that sense must mix with sensibility if they are to find personal happiness in a society where status and money govern the rules of love. This edition includes an introduction, original essays, and suggestions for further exploration by Devoney Looser.

▼▲
Jane Austen was born on December 16, 1775, at Steventon, near Basingstoke, the seventh child of eight of the rector of the parish and his wife. As a girl, Austen wrote stories, including burlesques of popular fiction. She lived with her family at Steventon until her father retired to Bath in 1801. After he died in 1805, she moved around with her mother and sister, without a permanent home. In 1809, they settled in Chawton Cottage, near Alton, Hampshire, on the estate of a wealthy brother. She published four novels, each after much revision, without signing her name to them: Sense and Sensibility (1811), Pride and Prejudice (1813), Mansfield Park (1814), and Emma (1816). She died in Winchester on July 18, 1817. Two other novels, Northanger Abbey and Persuasion (1818), were published posthumously in December 1817, with a biographical notice by her brother Henry Austen. He publicly revealed her as the author of all six novels. She also left unpublished compositions, including a short epistolary novel, Lady Susan; two unfinished novels, The Watsons and Sanditon; and three volumes of juvenilia. Her fiction is among the most respected and oft-quoted in the English language.

Devoney Looser is Professor of English at Arizona State Univer-sity and the author, most recently, of The Making of Jane Austen (Johns Hopkins University Press), a Publishers Weekly Best Summer Book (Nonfiction). Her recent writing on Austen has appeared in The Atlantic, The New York Times, Salon, The TLS, and Entertainment Weekly, and she’s had the pleasure of talking about Austen on CNN. Looser is one of the quirky weirdos featured in Among the Janeites: A Journey Through the World of Jane Austen Fandom and has played roller derby under the name Stone Cold Jane Austen.

▼▲
"As nearly flawless as any fiction could be."
—Eudora Welty

▼▲
I'm the author/artist and I want to review Sense and Sensibility.
Back
×