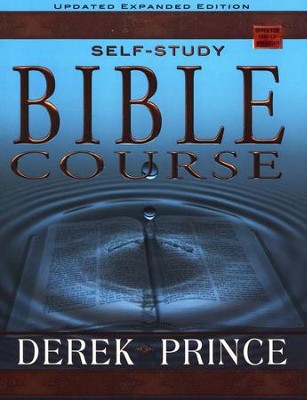 ▼▲
Newcomers to the faith have lots of questions about God's Word. This self-directed course gives them the answers! Twenty lessons address topics such as sin, healing, heaven, answer to prayer, baptism in the Holy Spirit, and more. Memory work, study questions, and notes lay a solid foundation for building a strong Christian life. 211 pages, softcover from Whitaker.

▼▲
Do you have unanswered questions about God and the Bible? Have you ever had trouble understanding what the Word says when you read it? If so, internationally recognized Bible teacher Derek Prince has developed an amazing help for you. In this updated and expanded edition of his Bible study course, you will find answers to questions such as: Even if you have never read the Bible before, you will find this systematic study guide easy to use and beneficial. If you have been a believer for many years, you will find a new ease in conversing with God, enjoying fellowship with other Christians, receiving guidance, and witnessing to and winning souls. Through this study, you will experience important changes in your life and discover an intimacy with God that you may never have known before.

▼▲
Derek Prince (1915–2003) was born in Bangalore, India, into a British military family. He was educated as a scholar of classical languages at Eton College and Cambridge University in England and later at Hebrew University, Israel. As a student, he was a philosopher and self-proclaimed agnostic.
While in the British Medical Corps during World War II, Prince began to study the Bible as a philosophical work. Converted through a powerful encounter with Jesus Christ, he was baptized in the Holy Spirit a few days later. This life-changing experience altered the whole course of his life, which he thereafter devoted to studying and teaching the Bible as the Word of God.
Internationally recognized as a Bible scholar and spiritual patriarch, Derek Prince taught and ministered on six continents for more than sixty years. Until a few years before his death at the age of 88, he traveled the world, imparting God’s revealed truth, praying for the sick and afflicted, and sharing his prophetic insights into world events in the light of Scripture. He is the author of over eighty books, six hundred audio teachings, and one hundred video teachings, many of which have been translated and published in more than one hundred languages. He pioneered teaching on such groundbreaking themes as generational curses, the biblical significance of Israel, and demonology.
Derek Prince Ministries, with its international headquarters in Charlotte, North Carolina, continues to distribute his teachings and to train missionaries, church leaders, and congregations through its worldwide national offices. It is estimated that Derek Prince’s messages have reached more than half the globe through his books, CDs, and daily radio program, which is now known as Derek Prince Legacy Radio. In 2002 he said, "It is my desire—and I believe the Lord’s desire—that this ministry continue the work, which God began through me over sixty years ago, until Jesus returns."

▼▲
I'm the author/artist and I want to review Self Study Bible Course, Updated & Expanded.
Back
Back