Skip to main content
SPRING CYBER EVENT STARTS NOW: And it's a really BIG deal! Up to 88% off through 5/24>
Selected Writings: Thomas Aquinas
By: Ralph McInerny
Stock No: WW36324 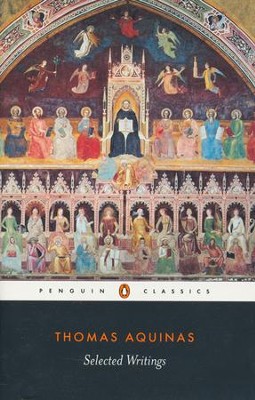 ▼▲
Although a controversial figure in his own day, St. Thomas Aquinas (c. 1225-74) forged a unique synthesis of faith and reason, of ancient philosophy and sacred scripture, which decisively influenced Dante and the whole subsequent Catholic tradition.
Intensely interested in Aristotle, as well as Plato, Paul, and Augustine, Thomas believed that unaided human thought can take us a long way towards wisdom and truth, although it must always be supplemented by the central mystery of revelation. His writings contain many classic statements of doctrine about angels, the Incarnation, Trinity, sacraments and the soul and also penetrating discussions on choice, creation and conscience, law, logic and the purpose of life. In this superb selection, arranged chronologically, Ralph McInerny brings together sermons, commentaries, responses to criticism and substantial extracts from one of Christianity's supreme masterpieces, the Summa theologiae. For anyone concerned to find ways of reconciling science and dogma, reason and religion, Thomas has always been a major source of inspiration. This volumes reveals both the development and the sheer scope of his work.

▼▲
In his reflections on Christianity, Saint Thomas Aquinas forged a unique synthesis of ancient philosophy and medieval theology. Preoccupied with the relationship between faith and reason, he was influenced both by Aristotle's rational world view and by the powerful belief that wisdom and truth can ultimately only be reached through divine revelation. Thomas's writings, which contain highly influential statements of fundamental Christian doctrine, as well as observations on topics as diverse as political science, anti-Semitism and heresy, demonstrate the great range of his intellect and place him firmly among the greatest medieval philosophers.

▼▲
Thomas Aquinas (1225-74) was an Italian philosopher and Dominican friar.

Ralph McInerny is Professor of Medieval Studies at the University of Notre Dame. Pre-eminent as a Thomas scholar, his many books include Aquinas Against the Averroists and A First Glance at St Thomas Aquinas.

▼▲
"There are readers of Aquinas's works, but Penguin's surpasses all by its sheer size, the very representative choice of texts, the excellent translations, and scholarly, informative introductions." —Albert E. Gunn

▼▲
I'm the author/artist and I want to review Selected Writings: Thomas Aquinas.
Back
Back