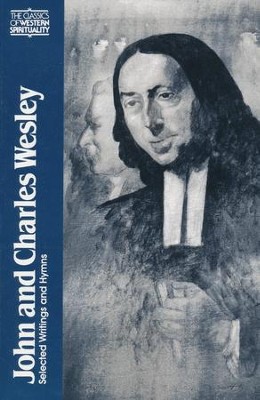 ▼▲
John and Charles Wesley were the leaders of the Methodist revival that swept early eighteenth century England and resulted in the founding of what was destined to become a major force in the history of Christanity. In this volume, the works of the two men who shared a spiritual as well as a natural brotherhood are considered. From John's early period are taken his Forms of Prayer, Scheme of Self-Examination, and translations of German hymns. His mature spirituality is revealed in selections from his Journal, Rules for Methodist Societies, the Plain Account of Genuine Christianity, the Covenant Service of 1780, selected letters, and the classic treatment of the fundamental theme of his life, A Plain Account of Christian Perfection. Together with a selection of Charles's hymns, these works reveal a spirituality that synthesied into a unique "Wesleyan" blend elements from the Church Father, CAtholic mystics, and Protestant Reformers. In so doing, explains Frank Whaling in his introduction to this book, the Wesleys have given us a vision of God that is a gift "so far mainly appropriated by the people called Methodists, but available in essence to all..."

In one series, the original writings of the universally acknowledged teachers of the Catholic, Protestant, Eastern Orthodox, Jewish, Islamic and Native American traditions have been critically selected, translated and introduced by internationally recognized scholars and spiritual leaders.

The texts are first-rate, and the introductions are informative and reliable. The books will be a welcome addition to the bookshelf of every literate religious persons". -- The Christian Century

▼▲
I'm the author/artist and I want to review John & Charles Wesley: Selected Prayers, Hymns, Journal Notes, Sermons, Letters and Treatises (Classics of Western Spirituality).
Back
Back