EARLY CHRISTMAS SALE: Shop over 900 items up to 85% off through 9/29 >
Search N Rescue: Guiding Unbelievers To The Savior
By: Eddie Roman 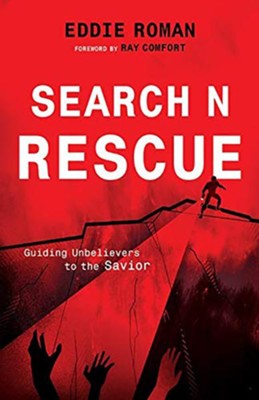 Search and Rescue is a practical guide to reaching people with the good news of Jesus Christ. Eddie has been teaching evangelism classes and leading outreaches for the past six years. As producer/director of Ray Comfort and Kirk Cameron's TV show, The Way of the Master, Eddie knows how to communicate deep truths in a way that is easy to grasp. Many Christians want to share the gospel with friends and family, but few actually do. Fear of rejection stifles many. Others don't share Christ because they don't know what to say. Drawing insight from the bible, as well as personal experience, Eddie gives clear instruction on how to overcome the obstacles and share your faith.

▼▲
Eddie Roman is the producer/director of The Way of the Master television program, a show that teaches Christians how to evangelize. Eddie has created programming for many Christian ministries including The Billy Graham Association, Samaritan’s Purse and Harvest: Greg Laurie. During his time as a missionary photographer / videographer, Eddie worked in Sudan, Indonesia, Burma, Pakistan, and many other third world countries. Prior to working in Christian broadcasting, Eddie worked primarily in action sports, with his programming appearing on Fox Sports Network, ESPN and MTV. Before his television days, Eddie was a professional BMX freestyle rider, competing and performing in stunt demonstrations around the world.

Early in his Christian walk, Eddie was teaching bible studies and going on mission trips, but was not sharing his faith. After many years of fear and complacency, he became involved in evangelism and God changed his life. You can read more about that in this book.
Eddie leads the evangelism ministry at Faith Bible Church in Temecula, California. He lives with his wife Carri and their son, Jesse, Matthew, Daniel, and Christopher.

▼▲
I'm the author/artist and I want to review Search N Rescue: Guiding Unbelievers To The Savior.
Back
×