Skip to main content
CYBER WEEK SALE! Spot great deals up to 88% off. >
Search for the Astral Dragon, Softcover
By: Bryan Davis
Stock No: WW45180X 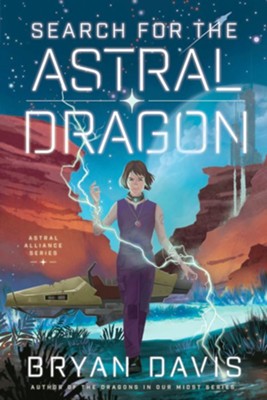 Search for the Astral Dragon, Softcover

▼▲
Search for the Astral Dragon Hardcover, by Bryan Davis, is a fastpaced YA space drama that follows Megan, a strong female protagonist as she is on an interplanetary search for her mother. Along the way, Megan discovers the horrors of child trafficking and slavery, and joins a group of teens that fight for the vulnerable and stand up to the corrupt systems that allow this to exist. The story is filled with unusual characters, daring escapes, various sentient species, and snarky spaceship computer systems. Megan is smart, quick-thinking, and a person of strong character that will challenge readers to consider difficult themes such as slavery, violence, and What is Justice? Paperback, 448 pages. Ages 13 to 18 years old.

▼▲
This fast-paced YA space opera (reminiscent of Star Wars) follows a strong female protagonist, Megan, on an interplanetary search for her mother. On her journey, Megan witnesses the horrors of child trafficking and slavery and joins with a group of other teens to fight against corrupt systems and stand up for the vulnerable.

Full of unusual characters and daring escapes, Search for the Astral Dragon draws readers into a world of snarky spaceship computer systems, a variety of different sentient species, spaceship tech, and magical elements. Megan is smart and quick-thinking, competent with spacecraft technology, and a person of strong character who’s experiences give readers difficult questions to consider.

▼▲
Set against an interstellar backdrop, this gritty science-fiction thriller explores concepts of humanity and mercy. When the Willis family is convicted of piracy in an intergalactic court, 12-year-old Megan is branded with the mark of a criminal, made to wear a shock collar, and forced to work on an Alliance spaceship under near-constant surveillance. Unexpected events allow Megan to escape, and she finds herself on a planet known for selling human children into slavery in dangerous mines filled with large, venomous bees. Determined to free the kids, she goes on a crusade to take down the slave trade but learns that its roots may be more insidious than she imagined. Faced with more hardship, Megan implores her deity, the Astral Dragon, for guidance. With the help of other young people—Dirk, Crystal, Oliver, and Zoë—Megan must find a way to expose the traitorous adults. But can she stay true to the merciful ways of her dragon god? Davis’ expansive romp is lushly imagined, filled with talking birds, gruff aliens, perilous planets, and many exciting near misses. However, the plotting is overstuffed, leaving certain threads frustratingly less developed; perhaps future installments will resolve this. Davis does not shy away from the horrors associated with slavery, with gritty, dark twists evincing the physical abuse the children must endure. Megan, Oliver, and Crystal are White; Dirk and Zoë are cued as Black. Intense and richly detailed but not without a few stumbles.

▼▲
I'm the author/artist and I want to review Search for the Astral Dragon, Softcover.
Back
Back