Skip to main content
In Search Of A Father's Blessing: The Cry of a Lost Generation - eBook
By: Doug Stringer
Stock No: WW84606EB 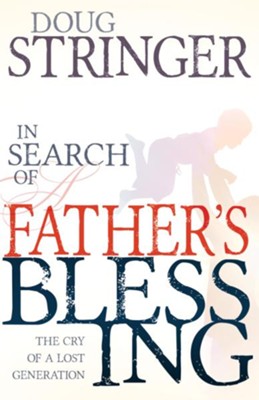 In Search Of A Father's Blessing: The Cry of a Lost Generation - eBook

▼▲
There are times when I feel like the title ’father’ is the worst name God could have given Himself. What a stupid idea, when ’father’ means rejection in my world."
—From a troubled teen’s letter to Doug Stringer

Doug Stringer’s ministry daily saw young people struggling with drugs, alcohol, abortion, prostitution, apathy, and other issues. As God gave insight the root of the problem became clear: America is devoid of fathers, both natural and spiritual; it is an orphaned nation with broken and dysfunctional families; it is a society of individuals in search of identity.
Doug gives the reader a clear path to the affirmation, acceptance, and approval of a father by drawing from his own struggle with fatherlessness to explain:The church is only now awaking to the heart cry of a generation that has been abandoned and left to its own devices. Doug Stringer believes that God is ready to release a multi-generational anointing, calling forth churches and nations to come back to their Abba Father.

▼▲
Doug Stringer is founder and president of Turning Point Ministries International, which birthed an international movement known as Somebody Cares, a network of organizations impacting their communities through unified grassroots efforts. A licensed pastoral counselor and ordained minister, Doug holds a Ph.D. in leadership and human development from Logos University, along with a pastoral certificate in practical ministry from Regent University. Doug’s books include In Search of a Father’s Blessing, It’s Time to Cross the Jordan, The Fatherless Generation, Somebody Cares, and Born to Die. He is published in numerous magazines and websites, including the Houston Chronicle, New Man, Charisma, Decision Magazine, National Religious Broadcasters Magazine, Christian Single, and www.crosswalk.com. As an Asian-American, Doug is considered a bridge-builder and ambassador of reconciliation among various ethnic and religious groups. From police departments and congressmen to international government officials, Doug shares a key concept: Working together, we can be more effective in our community efforts.

▼▲
A powerful, prophetic masterpiece that will bring our Master’s peace into the hearts of fathers and children around the world! This desperately needed book divinely bridges the gap between the generations and allows spiritual transfer for lasting spiritual legacy!"
—Bishop Dale C. Bronner, D. Min., Senior pastor, Word of Faith Family Worship Cathedral, Author, Change Your Trajectory

"Doug Stringer clearly paints a picture of the role of a father in a child or teen’s life and the effects that the absence of fathers are having on this generation. May the following pages inspire you to aggressively pursue and win your own children’s hearts for God."
—Ron Luce, Founder, Teen Mania Ministries

"Sacrifice is never about death; it is always about life. The sacrifice at the cross was about life and redemption for the entire world. Seldom does one see in their own circle of friends sacrifice made that could shift the future of nations. One of my closest friends has made that sacrifice for decades...Doug Stringer. From the day he met Jesus as a successful entrepreneur Doug started caring for people. In his passionate love for Christ he started taking in addicts from the streets—seventeen of them at one point—and housed them in his little apartment. Nobody told him to do that. That’s just Doug. And, decades later, it’s still Doug. This book isn’t just words; it’s a lifestyle that will transform your life and change the world around you. It’s the lifestyle of pursuing the Father’s blessing."
—Paul Louis Cole, D.Th., President, Christian Men’s Network Worldwide Global Fatherhood Initiative

"This book comes not just from Doug’s life experiences, but from the person whom God has molded Doug to be. He doesn’t just write about investing in people, he lives it. Doug’s communication style has always been ’straight talk, with huge lashings of love.’ Definitely recommended reading."
—Andrew Merry, National Field Experience Coordinator, Compassion International–Australia

"I had no idea this book would touch a deep chord in my heart. From the stories Doug tells to his amazing biblical insight, I was moved to tears, smiles, and even healing. I believe everyone will gain a closer relationship with the Father through the pages of this book. Thank you, Doug!"
—Lisa Abbott, Film producer and entertainment distributor

"Doug Stringer is wonderfully qualified to share tender, sensitive words that can bring healing and transformation to those who desire it. I recommend this book to all who struggle with issues dealing with their fathers—and also for those who do not."
—Dr. Paul Cedar, Chairman, Mission America Coalition

"A handbook for fulfilling the destiny of two generations of fathers and sons: the Elijahs and the Elishas, the Pauls and the Timothys. Doug’s life is a testimony to an entire generation that struggles to fit in with orthodox American Christianity. It is Doug’s passion for God and his authentic love as an apostolic father that has pioneered a path for today’s emerging leaders."
—Matt Stevens, Director, Somebody Cares Baltimore

"Wow! Talk about a book that makes you experience the whole spectrum of emotions! I first had a deep, aching in my heart and sadness for the state of our generation, then found myself wanting to jump up and down and say, ’Here I am, send me!’ Doug loves us enough to be honest with us about our desperate situation but doesn’t leave us scratching our heads over how to solve it. He provides the answers and the direction, based on God’s Word."
—Kimiko Soldati, US Olympic Diver

▼▲
I'm the author/artist and I want to review In Search Of A Father's Blessing: The Cry of a Lost Generation - eBook.
Back
Back