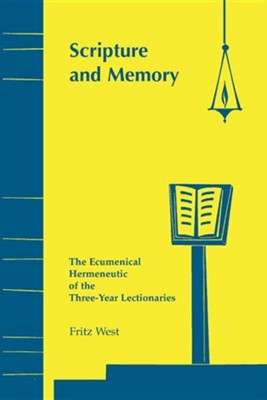 Scripture & Memory: The Ecumenical Hermeneutic of the Three-Year Lectionaries

▼▲
The history of the three-year lectionaries tells a tale of an evolving hermeneutic. Originating in the Roman Lectionary, this hermeneutic was developed in subsequent denominational and ecumenical versions, most recently the Revised Common Lectionary. In keeping with the broad appeal of the three-year lectionary pattern, the hermeneutic is ecumenical in character. An amalgam of the historical hermeneutics of the two western traditions, it uses both the memory of the Church to interpret the Bible and the Bible to structure the memory of the Church. After an examination of the hermeneutic, West lays out the memory patterns of the two most widely used versions of this lectionary, the Roman Lectionary and the Revised Common Lectionary.

After an examination of the hermeneutic, West lays out the memory patterns of the two most widely used versions of this lectionary: the Roman Lectionary and the Revised Common Lectionary. A knowledge of these memory patterns can help preachers create sermons in keeping with the lectionary's interpretative intent, because a Church's memory plays a large part in the interpretation of Scripture, and a lectionary text is interpreted before it is preached.

This book will interest Roman Catholic and Protestant scholars, clergy, and students interested in liturgy or preaching in English-speaking countries that use the Lectionary for Mass (Ordo Lectionum Missae) or the Revised Common Lectionary.

Fritz S. West, PhD, is an ordained minister in the United Church of Christ. aliturgical scholar, he is also the author of The Comparative Liturgy of Anton Baumstark.

▼▲
Fritz West, a liturgical scholar ordained in the United Church of Christ, has written numerous articles on liturgical methodology, the three-year lectionary, and worship in his Reformed tradition. He has published two books, The Comparative Liturgy of Anton Baumstark and Scripture and Memory: The Ecumenical Hermeneutic of the Three-Year Lectionaries.

▼▲
Catholics generally do not know the Protestant view of the Bible as primarily a book to be read, while Protestants generally do not know the Catholic and Eastern Orthodox view of it as primarily the Church's memory to be proclaimed orally. Doctor West's important ecumenical contribution probes the outlooks that have resulted in the two widest used Western lectionaries and that determine how Catholics and Protestants approach them. Students of worship need to know his carefully delineated conclusions.
Gerard S. Sloyan, The Catholic University of America

West has both understood and explicated the underlying historical and theological assumptions of this ecumenical effort and its Roman Catholic predecessor, Lectionary for Mass (1969), better perhaps than those who undertook the task in the first place.
(Rev. Prof.) Horace T. Allen, Jr., Professor of Worship, and Co-Chair, English Language Liturgical Consultation, Boston University

▼▲
I'm the author/artist and I want to review Scripture & Memory: The Ecumenical Hermeneutic of the Three-Year Lectionaries.
Back
×