Science in the Atomic Age
By: Dr. Jay L. Wile 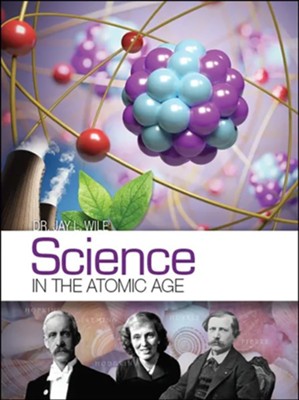 Science in the Atomic Age

Science in the Atomic Age is an engaging laboratory-based, middle school science course that covers a wide range of topics that are of interest to modern scientists.

Introducing scientific concepts in the context of history, students will follow the work of the scientists who lived during the mid-1900s period known as "The Atomic Age." This easy-to-read text starts with an introduction to the scientific method and the role of experiments before moving on to describe the story of how scientists developed the quantum-mechanical model of the atom. They'll learn about the experiments that led to this model along with the stories of the scientists who did the experiments. Students will then build on their understanding to learn about the Periodic Table of the Elements and how to interpret it. Further chapters cover covalent and ionic compounds, the incorrect cubical model of the atom, the discovery of DNA's role in life, cells, and more. These topics are all discussed in the context of history, explaining how specific scientific advances led to today's scientific explanations. This allows students to learn not only the current scientific understanding of these topics, but also how scientists reached that understanding.

As the course builds in the complexity of topics covered, students discus the living world including the levels of organization found in creation. Students learn how cells work together to make tissues, how tissues come together to make organs, how organs form organ systems, how those organ systems produce organisms, and how those organisms relate to one another in populations and communities. Students also learn how those communities interact with the physical environment to form ecosystems, which then form biomes. Chapters also cover fascinating new discoveries such as the function of the human appendix, the human microbiome, and soft tissue found in dinosaur fossils. Throughout the course, God's design in nature is highlighted, and topics in the creation/evolution debate are discussed.

Sixteen modules are included, each with an introduction, chapters with "comprehension check" boxes, and chapter review. Lessons take an average of 30-45 minutes each day for 36 weeks. Each two week period includes 7 days reading and doing experiments, two days on the chapter review, and one day on a test.

A total of 58 experiments are included throughout the book (approximately 45 hours of lab work). Experiments use common household goods, though for some items that may not be on-hand; aa full list (organized by section) is provided.

▼▲
I'm the author/artist and I want to review Science in the Atomic Age.
Back
×