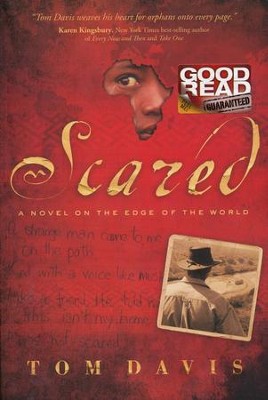 Scared, On the Edge of the World Series #1

▼▲
Once an award-winning photojournalist, Stuart Daniels is reeling from debt, a broken marriage, and depression. Given one last chance to redeem himself, he accepts a make-or-break assignment covering the AIDS crisis in Africa. In an unexpected encounter, Stuart meets Adanna, a young orphan fighting for survival. Soon both their lives are changed forever! 288 pages, softcover from Cook.

Stuart Daniels has hit bottom. Once a celebrated and award-winning photojournalist, he is reeling from debt, a broken marriage, and crippling depression. The source of Stuart's grief is his most famous photo, a snapshot of brutality in the dangerous Congo. A haunting image that indicts him as a passive witness to gross injustice.

Stuart is given a one last chance to redeem his career: A make-or-break assignment covering the AIDS crisis in a small African country. It is here that Stuart meets Adanna, a young orphan fighting for survival in a community ravaged by tragedy and disease. But in the face of overwhelming odds, Adanna finds hope in a special dream, where she is visited by an illuminated man and given a precious gift.

Now, in a dark place that's a world away from home, Stuart will once again confront the harsh reality of a suffering people in a forgotten land. And as a chance encounter becomes divine providence, two very different people will find their lives forever changed.

Tom Davis is an author, consultant, and the president of Children's HopeChest ( www.hopechest.org) a Christian-based child advocacy organization helping orphans in Eastern Europe and Africa. His first book, Fields of the Fatherless has sold over 60,000 copies. Tom holds a Business and Pastoral Ministry degree from Dallas Baptist University and a Master's Degree in Theology from The Criswell College.

▼▲
As you see, Mr. Daniels, fear is a way of a life here, Stuart Danielss driver tells him in Scared by Tom Davis. And that is in the safe part of Swaziland.

But Daniels knows all about fear from his last trip to Africa, the trip that made him a world-famous photographer and destroyed his life. His marriage is on the rocks, hes drinking too much, and he has one last chance to save his job by going back to Africa to take pictures for British journalist Gordon Clandish who now lives in Swaziland.

Twelve-year-old Adanna is hungry daily, almost starving. Her father, a long- distance trucker, long ago left the family and all presume he is dead. Her mother is dying of AIDS. Much of the care of her younger brother and sister falls to her. After having a vision of an Illuminated Man who loves her and promises to bring her home after giving her a gift for her country, Adanna prays to the Illuminated Man when the terrors of her life surround her. Christian men like Pastor Walter and Tagoze, the chiefs brother, try to protect and provide for the starving children, unlike the average man of the area.

When Stuart meets with Gordon and some of his contacts, strange things begin to happen. At a church service he hears a voice telling him to feed His sheep. He sees dignity in a man dying of AIDS. But the greatest change in Stuart comes from meeting Adanna in the midst of her suffering. Their impact on each other affects not only themselves but Adannas whole community.

Based on true people and events which are fictionalized, Scared is a powerful story told in the voices of Adanna and Stuart. It is not a light, frothy story. It tells the importance of the one, as in the one lost sheep or coin, and the importance of the one who commits himself to helping others. It takes the reader into the heart of the AIDS crisis raging throughout much of Africa. Although he discusses the effect on adults, Davis concentrates on the children, the hunger, the lack of protection from male predators, the insecurity, the confusion, the lack of education, and the vastness of the devastation. He also shows people like Pastor Walter, based on a real person, who allows his own family to suffer some hunger so that other children might not starve.

The story is engrossing and well written, its main weakness being some stiff dialogue about two-thirds through the book. The primary message of Scared is that of pure and undefiled religion from James 1:27. Davis, an accomplished author and the CEO of Childrens HopeChest, includes discussion questions and an interview about the storys background and his work. If you thought A Thousand Splendid Suns by Khaled Hosseini was well written, try Scared.  Debbie W. Wilson, www.ChristianBookPreviews.com

▼▲
Nonfiction author Davis (Fields of the Fatherless) makes his fiction debut with a story about two people worlds apart who help each other find redemption. An orphan girl in Swaziland endures her uncle's abuse through visions of the illuminated man who she believes will take her to her dead mothers side. When photographer Stuart Daniels discovers the girl near death, he enlists a pastor and a village chief to help her and her two siblings. Facing floods, confronting and aid agency's fraud, and absorbing a brutal attack by one of many desperate starving people may be the only path toward atonement for Stuarts past life. Davis shows insight into African cultures and his writing is vivid, but the novel is weakened by shifts in tense and point of view and lack of patience for character transformation. The novel is the first of three; the series could become popular if the quality of the writing can improve enough to do justice to the passion with which the author champions his cause. (June) Copyright 2009 Reed Business Information.