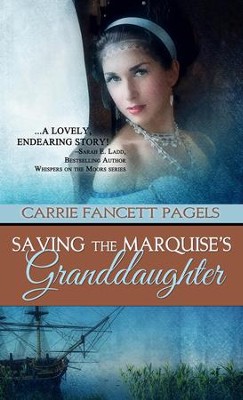 By: Carrie Fancett Pagels
Harbourlight Books / 2016 / ePub
4.5 out of 5 stars for Saving The Marquise's Granddaughter - eBook (23 Reviews) Write a Review
In Stock
Stock No: WW84032EB

The story takes place in France during the mid 1700s. During this time people faced difficulties in their faith beliefs. Huguenots were Protestant families in a Catholic France and were regularly arrested, then executed the next day simply for being a Protestant. Suzanne Richelieu escaped Versailles after her Huguenot father was arrested. Johan Rousch is a young peasant farmer who felt the duty to protect her from the religious persecution. The two were contracted to work in exchange for transportation overseas to America. Her former fiance showed with plans to abduct her. Does Johan save her for a second time?

▼▲
In a land fraught with religious strife, they must break the barriers between status and faith to forge a fresh future in a new world…After her Huguenot father is arrested, aristocrat Suzanne Richelieu escapes Versailles. Handsome German peasant, Johan Rousch, risks his life to bring her to the safety of his family’s farm in the Palatinate duchy, but when Suzanne’s brother and the French army arrive with a warning that they plan to burn the area, she and Johan are forced to flee. With no money or options, both become indentured servants in exchange for safe passage to Philadelphia. Suzanne falls gravely ill aboard ship and marries Johan, only to survive with no memory of the wedding—a reality made worse when Johan spots the “priest” who married them working as a surveyor and later in Quaker cleric garb. Are their wedding vows valid? When Suzanne's former fiancé arrives in port, planning to abduct her, Johan must save her again—but can he do so before Suzanne is lost to him forever?

▼▲
Carrie Fancett Pagels, Ph.D., was a psychologist for twenty-five years before becoming a Christian historical romance writer. An award-winning and bestselling author, she's previously published short stories and novellas as well as nonfiction material. Saving the Marquise's Granddaughter was inspired by genealogical research. She lives in the historic triangle of Virginia with her husband of twenty-seven years and their teen son, with an adult daughter nearby.

▼▲
I'm the author/artist and I want to review Saving The Marquise's Granddaughter - eBook.
Back
Back