Skip to main content
Sarah Morton's Day: A Day In The Life Of A Pilgrim Girl
By: Kate Waters
Stock No: WW812207 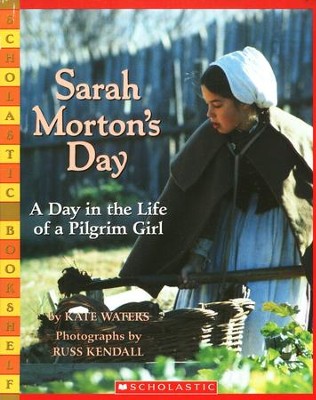 Sarah Morton's Day: A Day In The Life Of A Pilgrim Girl

▼▲
See what a day in the life of 9-year-old Pilgrim Sarah Morton was like! A classic Thanksgiving book, photographs of Plimoth Plantation interpreters show the chores, games, education, garments, and lifestyle of 1627 alongside the story of Sarah's friendship with her friend Elizabeth and her family's life with a new stepfather. 32 pages with glossary, softcover.

▼▲
This bestselling photographic Thanksgiving picture book is now available in paperback!At sunup when the cockerel crows, young Sarah Morton's day begins. Come and join her as she goes about her work and play in an early American settlement in the year 1627.There's a fire to build, breakfast to cook, chickens to feed, goats to milk, and letters and scripture to learn. Between the chores, there is her best friend, Elizabeth, with whom she shares her hopes and dreams. But Sarah is worried about her new stepfather. Will she ever earn his love and learn to call him father?

▼▲
Author Kate Waters was born on September 4, 1951, in Rochester, NY. She went on to earn a B.A. from Newtown College of the Sacred Heart (Boston College) and a M.L.S. from Simmons' Graduate School of Library and Information Science. She grew up in a big family in which storytelling was very important. She worked as a librarian for ten years at the Boston Public Library. There she became very interested in telling stories to young people and finding out what they enjoyed reading. She moved to New York where she worked on a children's magazine. While working at the magazine, she started to think about new ways to present history and traditions to children. Her books include pictures of actors depicting the stories Kate writes. In addition, her books have been praised for their content and have won many awards. Kate currently lives in New York City.
Acclaimed photographer Russ Kendall was born in Texas in 1957, but grew up on Cape Cod in Massachusetts. From an early age he was interested in the world and other cultures, and he dreamed of running away and living with the Eskimos — something he would eventually get to do while working on his award-winning Eskimo Boy: Life in an Inupiaq Village. In school, Kendall thought he would grow up to be a forest ranger or a veterinarian; although he loved making pictures, he flunked his first photography class in tenth grade.Kendall served in the Air National Guard in Massachusetts for six years, and studied at Cape Cod Community College and Boston University, majoring first in biology and later in journalism. After graduation, he worked as a photographer for newspapers in Anchorage, Alaska, and Portsmouth, New Hampshire. Kendall's first book for children was the well-received Sarah Morton's Day: A Day in the Life of a Pilgrim Girl, written by Kate Waters; the two have since collaborated on that book's many companion volumes. In Giving Thanks: The 1621 Harvest Feast, words by Kate Waters and photographs by Russ Kendall help reconstruct the first Thanksgiving. For both Eskimo Boy and Russian Girl: Life in an Old Russian Town, he was able to spend several months at a time living in a world very different from home.Russ Kendall now lives in Portland, Oregon. When he is not working or traveling to faraway places to take pictures, he enjoys kayaking, hiking, cooking, and playing bluegrass guitar.

▼▲
I'm the author/artist and I want to review Sarah Morton's Day: A Day In The Life Of A Pilgrim Girl.
Back
Back