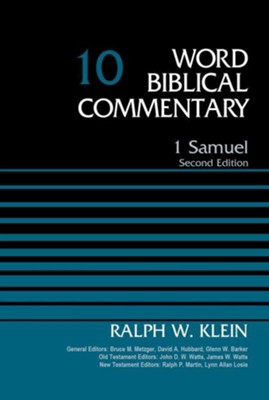 Ralph W. Klein is Christ Seminary-Seminex professor of Old Testament at the Lutheran School of Theology at Chicago (LSTC). He has written for numerous journals, has been editor of Currents in Theology and Mission since 1974, and is an associate editor of the Catholic Biblical Quarterly. His books include Textual Criticism of the Old Testament, Israel in Exile, Ezekiel: the Prophet and his Message; and the commentary on Ezra and Nehemiah in the New Interpreter's Bible. Klein received his M.Div. from Concordia Seminary, St. Louis, and his Th.D. from Harvard University.

▼▲
I'm the author/artist and I want to review 1 Samuel: Word Biblical Commentary, Volume 10 [WBC] (Revised).
Back
Back