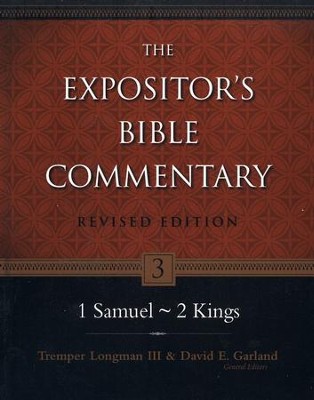 
Dr. Ronald Youngblood is a graduate of Valparaiso University (BA), Fuller Theological Seminary (BD), and the Dropsie College for Hebrew and Cognate Learning (PhD). He has served as professor of Old Testament at Bethel Seminary in St. Paul, Wheaton Graduate School, Trinity Evangelical Divinity School, and Bethel Seminary in San Diego, and is currently serving in the same capacity at International College and Graduate School in Honolulu. He is an associate editor of the NIV Study Bible; author of 1 and 2 Samuel in the Expositor's Bible Commentary series; and a co-translator and co-editor of the Holy Bible, New International Version. He has also edited and/or written ten other volumes, including Nelson's New Illustrated Bible Dictionary, for which he was awarded the Gold Medallion Book Award by the Evangelical Christian Publishers Association. He serves as chairman of the board of directors of International Bible Society and frequently engages in preaching and teaching ministries at home?
Richard D. Patterson (PhD, University of California, Los Angeles) is distinguished professor emeritus, Liberty University. He has been involved in twelve different Bible projects either as a translator, peer reviewer, or contributor. He has written well over 100 articles for major publishers and periodicals, and has served as associate editor of Zondervan's New International Dictionary of Old Testament Theology and Exegesis. He is currently authoring Joel and Kings (with Hermann Austel) for the second edition of the Expositor's Bible Commentary series. He and his wife, Anna, live in Simpsonville,South Carolina.
Hermann Austel was professor of Hebrew and Old Testament at Northwest Baptist Seminary. He coauthored Kings in the Expositor's Bible Commentary and was a contributor to the New International Dictionary of Old Testament Theology and Exegesis.

▼▲
I'm the author/artist and I want to review 1 Samuel-2 Kings, Revised: The Expositor's Bible Commentary.
Back
Back