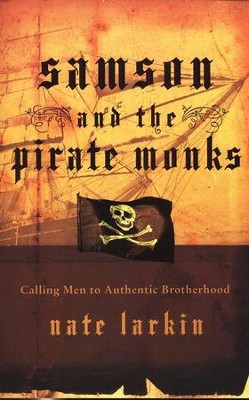 Samson and the Pirate Monks: Calling Men to Authentic Brotherhood

Listen to Nate Larkin introduce his book by clicking on the audio link below.

With no-holds-barred honesty and poignant storytelling, Nate Larkin introduces a model of community and friendship that is reinvigorating men's ministry across the country, a model he calls The Samson Society. Too many men see the biblical hero Samson as their model for manhood--a rugged individualist of the highest order. Yet, Samson's solitary successes were eventually overcome by moral weaknesses. Larkin, through the story of his own past and the stories of those in The Samson Society, offers a radical, refreshing alternative.

▼▲
Currently in vogue is "the Christian Men's Movement," a reaction to the perceived feminization of Christianity and an attempt to help men realize their God-given missions in the world. Using the biblical Samson as a model, Larkin offers "The Samson Society," a coming together of evangelical men to encourage and help each other on the road to a full Christian life. Though blessed with great strength and a pleasing physique, Samson suffered from moral lapses and a lack of clarity about his mission. In the end, this would be his undoing. Larkin uses Samson's story to show how he and his fellow churchmen-the "pirate monks" of the subtitle-must focus more fully on the moral and ethical challenges of being a Christian, and less on the physical and the superficial. Describing themselves as loners, wanderers and liars, these men set out to correct their shortcomings and align themselves with what they perceive as God's true plan for their lives. Included is a plan for Christian men to begin their own Samson Society. Written in a breezy, comfortable style, Larkin offers a workable plan for men to identify their spiritual dysfunctions, though he offers little that hasn't been said by other proponents of the Christian men's movement. (Feb. 20) Copyright 2006 Reed Business Information.

▼▲
Nate Larkin, a former pastor who earned his M.Div. from Princeton Theological Seminary, is now a freelance writer and speaking coach, as well as the founder of The Samson Society.

▼▲
I'm the author/artist and I want to review Samson and the Pirate Monks: Calling Men to Authentic Brotherhood.
Back
×
Back
×