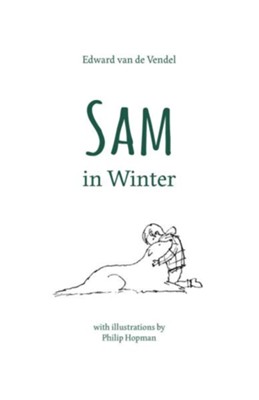 Sam, the mysterious dog Kix met last summer, is now a part of the family. But Sam has been acting strange lately, and even Kix can't ignore the fact that his beloved dog is getting old. Still, Kix isn't worried—until the day Sam disappears and doesn't return.

As winter sets in, Kix becomes desperate to find Sam, so desperate that he decides to turn to an old enemy for help. Will they be able to rescue Sam before it's too late?

Edward van de Vendel once again delivers a deeply affecting story that will stay with readers long after they turn the final page.

▼▲
Edward van de Vendel has written dozens of books for children and young adults. In 2011 and 2012 he was nominated for the Astrid Lindgren Memorial Award. He lives in the Netherlands. Visit his website at www.edwardvandevendel.com.

Philip Hopman studied at the Rietveld Academy and has illustrated more than 250 books, including A Dog Like Sam, Mikis and the Donkey, and Soldier Bear (all Eerdmans). He lives in the Netherlands.

▼▲
Canadian Review of Materials
"For pet lovers who have experienced that special relationship with an animal, this emotionally charged story will be memorable. . . . Highly Recommended."

▼▲
I'm the author/artist and I want to review Sam in Winter.
Back
×