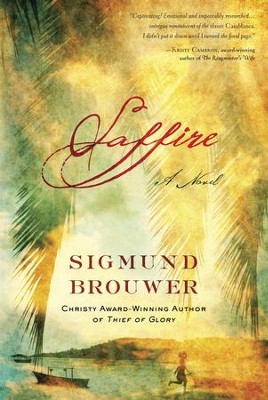 Days before the outbreak of World War I, the United States completes one of the greatest engineering feats in history: the Panama Canal. Like King Solomon of Israel, chief engineer George Washington Goethals enjoys nearly unlimited authority. But will a rough-riding cowboy and a 10-year-old child affect the project's fate and his own destiny forever?

▼▲
I reminded myself that once you start to defend someone, it’s difficult to find a place to stop. But I went ahead and took that first step anyway. . .

For President Teddy Roosevelt, controlling the east-west passage between two oceans mattered so much that he orchestrated a revolution to control it. His command was to ’let the dirt fly’ and for years, the American Zone of the Panama Canal mesmerized the world, working in uneasy co-existence with the Panamanian aristocrats.

It’s in this buffered Zone where, in 1909, James Holt begins to protect a defenseless girl named Saffire, expecting a short and simple search for her mother. Instead it draws him away from safety, into a land haunted by a history of pirates, gold runners, and plantation owners, all leaving behind ghosts of their interwoven desires sins and ambitions, ghosts that create the web of deceit and intrigue of a new generation of revolutionary politics.  It will also bring him together with a woman who will change his course—or bring an end to it.

A love story set within a historical mystery, Saffire brings to life the most impressive-and embattled- engineering achievement of the twentieth-century.

▼▲
The best-selling author of the multi-award-winning World War II novel Thief of Glory, Sigmund Brouwer has written nineteen novels and has more than three million books in print. Through his Rock & Roll Literacy Show, he leads writing workshops to eighty thousand students a year in schools from the Arctic Circle to inner-city Los Angeles. Sigmund is married to recording artist Cindy Morgan and has two daughters.

▼▲
"Brouwer's (Thief of Glory) captivating tale of intrigue, set in Panama in 1909, is tinged with romance, grounded in historical accuracy, and anchored by a powerful protagonist. James Holt's colorful past includes stints in Teddy Roosevelt's Rough Riders and Buffalo Bill's Wild West Show. When his old friend, now President Roosevelt, entices him to investigate sabotage at the Panama Canal construction site, Holt quickly finds conspiracies and collusions far darker than even Roosevelt imagined. While Panamanian revolutionaries attempt to wrench control of the canal from the U.S., white American Holt becomes more concerned with Saffire, a young mixed-race girl whose mother has mysteriously and improbably abandoned her. Holt is a complex hero of unmistakable integrity, driven by devotion and compassion and yet haunted by regrets. His steadfast determination makes him a courageous defender, but that same grit can become dangerously prideful. Holt occasionally needs a rescue himself. There are certainly inspirational elements to the story, but it doesn't delve deeply into religious or spiritual concerns. Brouwer's finely crafted, ethical tale will appeal to readers of historical fiction who appreciate clear divisions of good and evil." (starred review) —Publishers Weekly

"An intelligent mystery...Sigmund Brouwer’s 'Saffire' is a fascinating novel. Unique, smart and compelling, Saffire is sure to be remembered well after the last page." —BookPage

"A well-crafted plot filled with clearly defined characters that are distinctive, sharp and detailed is the highlight of this story along with Brouwer’s fine, smooth, compelling storytelling. An unforgettable read." (TOP PICK) —Romantic Times

"Captivating! Emotional and impeccably researched. Saffire is a sweeping, early twentieth century novel with a colorful supporting cast and a main character who is both steadfast and strong. Brouwer weaves historical fact and storytelling with an expert pen—leaving the reader satisfied and, at times, in awe of the mystery and intrigue reminiscent of the classic Casablanca. I didn’t put it down until I turned the final page."
—Kristy Cambron, award-winning author of The Ringmaster’s Wife

"Emotionally riveting and exquisitely raw, Thief of Glory is an unforgettable tale about survival, not just of the body, but of the heart and soul, with an ending that will echo in your mind long after you’ve closed the book. Brouwer is a master storyteller."
—Susan Meissner, author of Secrets of a Charmed Life and Stars over Sunset Boulevard

"In Thief of Glory Sigmund Brouwer plunges readers into the mysterious embrace of the Dutch East Indies during the convulsions of the Second World War. Few authors have such an ability to immerse an audience in the sights, sounds, smells...and horrors! Brouwer makes you live it&hellip;sharing each moment of an exotic and terrifying time and place in a gripping, personal way."
—Bodie and Brock Thoene, authors of Take This Cup

"Sigmund Brouwer’s Thief of Glory is a powerful story, richly told. Young Jeremiah Prins is a complex and fascinating hero, blessed with great gifts and challenged by choices to use them for good or evil. The details of life in a Japanese civilian prison camp are revealed in unflinching but compassionate realism, and the characters depict the human capacity for both great selfishness and great heroism. This is truly one of the best books I’ve read this year."
—Sarah Sundin, award-winning author of On Distant Shores and In Perfect Time

"I’ve been a fan of Sigmund Brower’s books for ages, but Thief of Glory cocooned me in rich words, vivid descriptions, and true-to-life characters, making this book hard to put down. A fan of World War II, I’ve read countless tales, but World War II in the Dutch Indies was new to me, fresh and heart-wrenching at the same time. A true glimpse of light amongst darkness, made even more special due to the inspiration of his own parents’ true story. Thief of Glory is going on my keeper shelf!"
—Tricia Goyer, USA Today best-selling author of over forty books, including Chasing Mona Lisa

▼▲
I'm the author/artist and I want to review Saffire.
Back
×
Back
×