Skip to main content
A Rooster Once Crowed: A Commentary on the Greatest Story Ever Told
By: Bryant Cornett
Stock No: WW262079 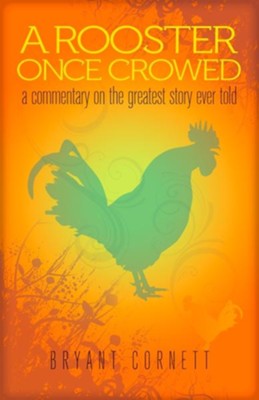 A Rooster Once Crowed: A Commentary on the Greatest Story Ever Told

Tell us a little about yourself.  I'm the last guy that should have written this book.

I'm just a guy. I grew up in Texas. I run a business and have a family. I grew up in the church, and might have mumbled that I believed, but in 34 years, I'd never made a decision based on the cross.

I did the right thing, but that's how you get ahead in the long game.

I'm like the reverse of the hitting rock bottom story. Someone once said, "If God wants to play a really cruel trick on you, He'll give you everything you wanted." I got that and I still wanted more.

Taking the time to stop and realize that was the beginning of my awakening.

What was your motivation behind this project?  I didn't set out to write a book; I was just willing to be humiliated. When I came to Jesus, I began to study earnestly. For hours, I'd pour over books and the Bible to better know this One to whom I'd set my heart. I was like a lake with streams of wisdom pouring in, but no outlets. So I started leading small groups and Sunday school classes. I joined CLC (Christian Leadership Concepts a program for men to become disciples), and I got known for leading a good lesson, but I had a programa beginning, middle, and end. I got a nudge to leave a little more room for the Spirit to move within the classes, so for the first time, in October 2012, I planned to stand before the biggest class I knew (my peers) and lead without a single note. I had an idea how it would look, but GOD had another idea. I was beginning to get nervous about it as the Sunday approached, but that Thursday night, I got a view of the Gospel as one cohesive story. It was as clear as a painting and on that Sunday in October, I just explained what I saw. I recorded the lesson for some friends that were out of town because I knew it was something special. With no flash or video or even a website, just passing the link around, that lesson has been downloaded over 8,000 times4,000 times within the first couple of weeks in 53 countries. This is getting long, so I'll just say that over the months after that, I realized that I wanted to have this conversationto tell this storyto everyone, and that a book, this book, was the way to do that.

What do you hope folks will gain from this project?  I have a real heart for moving the Gospel into the conversation. Im working through something now about Oklahoma. When a tornado whips through there or a flood destroys New Orleans or a church gets bombed in India, at my best, I might take a moment and pray for the folks down there. Three or four times that day Ill think, What a shame that they have to go through that. Children die, businesses ruined and lives torn apart, but I very rarely will I cry over such destruction. Do you know why? Because I dont know them. I have empathy for them, but it doesnt break me because I dont have a relationship with the folks that were ravaged there. If half that happened to my friend or child or wife, I would be torn apart. Well, great men and women can read Mark 15 and feel exactly like I felt for Oklahoma or New Orleans or Indian Christians. Thats not right because if we have a relationship with Jesus, then that story should affect us. I want every Christian to pull the cross deeper into their heart and look at it as an overwhelming gesture of lovea pivotal event in their own livesaround which they will bend every decision going forward. I want A Rooster Once Crowed to bring the Gospel back into every conversation.

Who are your influences, sources of inspiration or favorite authors / artists?  I love Mark because he loved Peterand still put in all those crazy things about him. I love Moses because he had the guts to share what God told him about Creation. I love Tozer in Pursuit of God because he wrote it on his knees and couldnt not share the greatness of the pursuit. I love Eric Metaxas because he lives in the lions den and keeps raising his voice. I love C. S. Lewis because he showed me how to look at the back of the diamond that is the Gospel in The Great Divorce and The Screwtape Letters. But of all them, Im only jealous of C. S. Lewis because God made him so good he didnt have to edit.

Anything else you'd like readers / listeners to know:  I would love to hear from you on how this material connects with you. You'll wrestle with it. I wrestled with it. If you'd like to hear the lesson heard around the world, it's up on the Full Porch Press website along with a video that I know you'll love. I'm on Facebook (username: wbryantcornett) and twitter (@FullPorchPress), too. If you'll send us an email at info@fullporchpress.com, we'll include you on the mailing list for updates, giveaways and opportunities to move the Gospel back into the conversation. Thanks for listening.