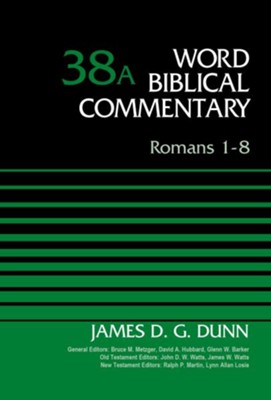 James Dunn (Ph.D., Cambridge) was for many years the Lightfoot Professor of Divinity in the Department of Theology at the University of Durham. Since his retirement he has been made Emeritus Lightfoot Professor. He is a leading British New Testament scholar, broadly in the Protestant tradition. Dunn is especially associated with the New Perspective on Paul, a phrase which he is credited with coining during his 1982 Manson Memorial Lecture.


James W. Watts is a professor and chair of the Department of Religion at Syracuse University. His teaching and research interests include biblical studies, especially the Torah/Pentateuch, ritual theories, rhetorical analysis, and comparative scriptures studies. He is a co-founder of the Iconic Books Project. He had served as the associate Old Testament editor of the Word Biblical Commentary (1997 - 2011).

▼▲
I'm the author/artist and I want to review Romans 1-8: Word Biblical Commentary, Volume 38A [WBC].
Back
Back